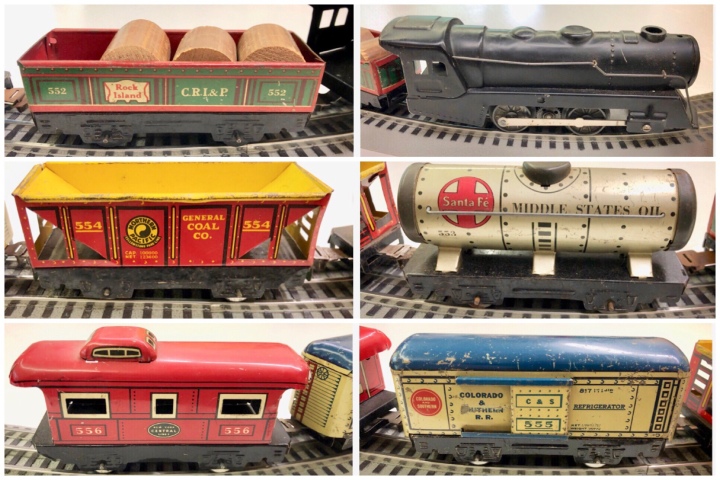 Back in March, I shared the concept of early retirement being like a second childhood. Really, a combination of the best of being a kid and an adult at the same time – “Kidulthood”.

One aspect of Kidulthood that has been renewed this year might seem a bit silly for a former MegaCorp executive to spend his time on, but my Dad and I have spent a fair amount of time over the past 3-4 months playing with toy trains!

My Dad grew up in the 1930s-40s and played with electric trains. Specifically, he had a set of pressed-tin Marx trains that were more popular with kids then than the now more well-known Lionel Trains. He had a small loop of Marx trains running under the Christmas tree for a few years, but it wasn’t running well and it wasn’t exactly what he had when he was a kid.

To get things right we replaced his track system, invested in a different power pack, and researched the train cars that were originally sold together in the Marx sets. We set things up in his garage workshop, went to hobby shops/model train show, and looked for the best deals on eBay. After a couple of enjoyable setbacks, his childhood set is primed for a Christmas tree reintroduction.

At the same time, I’ve rekindled my childhood interest in model trains and my LEGO hobby. I have a few sets of HO & O scale trains that I’ve worked on over the years, but a friend showed me his kid’s LEGO trains this past winter. After buying some LEGO trains & track, I’m spending more time on this than my Dad spent on his. In fact, I’m planning to scrap my old Tyco & Lionel trains and build a new LEGO train/“Toyland Town” under our Christmas tree by this December.

I have no idea how long this hobby project might take, but I’m sharing it just to give you a sense of the kind of surprising directions a life of FIRE (financial independence & early retirement) can take you.

While I still have many ‘grown up’ responsibilities like board work, angel investing, and some consulting work – hobby projects like these are a fun side Kidulthood that neither my Dad or I had time for when we were working!

What childhood hobbies have you rekindled, or would you like to rekindle in early retirement?

6 thoughts on “Playing With Toys in Early Retirement”