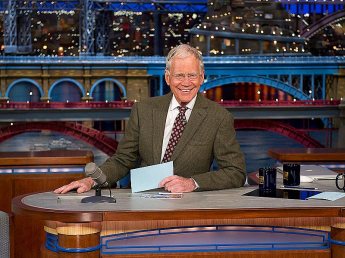 David Letterman is retiring after this Wednesday’s show. At 68 years old, I wouldn’t call it a early retirement, since he has been on the air for 33 years in his late night slot, starting in 1982.   It has been fun to watch the last few shows as he counts down to Wednesday night.

I was in high school when he first went on NBC with the Late Night. I was babysitting and expected to see the Tomorrow Show with Tom Snyder, but instead David Letterman came on for the first time.  Everyone remembers that Bill Murray was his first guest, but in the back of my mind I also thought that Bob Hope was on that show. I haven’t found any reference to that in the articles celebrating Dave’s wind down this week.

My college years and working life, which spans 31 years, largely aligns with Dave’s time on the air. I was a big fan of his in college (as everyone was in the early 80s) and thoroughly enjoyed his late-night antics. Over the years my DW and I shifted over to watching Jay Leno, and more recently Jimmy Fallon. It’s been fun these last few weeks to see the great guests that David Letterman has had on his show and see some of the clips from “the olden days” of both Late Night and the Late Show.

Dave’s also had some great jokes about being retired. The other night, he said to Oprah “Will I be bored? No I only have to fill one hour a night with something else”.   He also said “I am looking forward to mid day drinking and psychotherapy. “

President Obama, who will also be retired in 2016, was on Letterman and said “I was thinking you and me could play some dominoes together.  We could go to the local Starbucks and swap stories.”

It has been fun to see Dave talk about some of the emotions that I am starting to feel with a little more than 10 months to go before my early retirement.

One thought on “David Letterman Retirement”