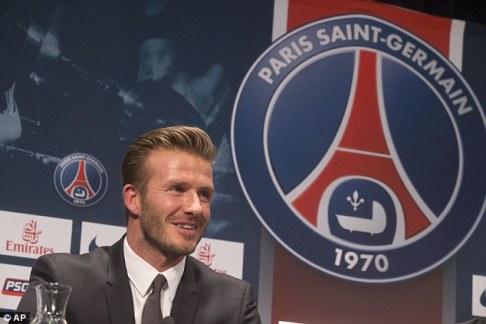 Nine months ago, my wife and I started our “One More Year” fund.  I’m working the last year of my career with all of the paychecks going into a charitable giving fund.  It will be given away in the first few years of our early retirement.  Since then, I’ve written about two famous people who also worked purely for charity: Ben Franklin as Governor of Pennsylvania and Sean Connery, who gave away his salary from playing James Bond in Diamonds are Forever.

One reader recently directed me to another example for this list: David Beckham, soccer-player extraordinaire & People magazine’s current “Sexiest Man Alive”.  According to this Article in The Guardian, Beckham signed a one-season free agent deal with Paris St. Germain and donated his entire €3.4M salary (about $3.7M US) to a Parisian children’s hospital and another French kids charity. It was his final season in professional soccer and he wanted to do something special.

He said that “We’ve decided on something that’s quite unique. I won’t receive any salary: we’ve decided my salary will go towards a local children’s charity in Paris and that’s one of the things we’re very excited and proud to do” adding “It’s something I’m not sure has been done before but I’m passionate about children and the charity, so we came together and it’s something special.”

Beckham’s decision was lauded in an article from London’s Telegraph newspaper, and others called him “St. David”.  Still, some criticized him for avoiding paying French taxes, which would have claimed more than 75% of the total.  (Apparently some people view big government as a more virtuous recipient than a children’s hospital.)  in fact, it took almost two years of negotiation with the French government before he was allowed to give his salary away.

Others have questioned whether or not this was just a PR ploy by Beckham to help his post-soccer endorsement career or earn him a knighthood from Queen Elizabeth.  It’s true that it received a lot of media coverage, but is that a bad thing?  It’s not like this is the first or only charitable act that Beckham and his wife has been involved with.  He has served as a UNICEF Ambassador for more than 10 years and participated in more charities than he has championship soccer teams.

Afterall, isn’t this what we want when we say that professional athletes should be role models?  We’re quick to criticize them when they do something wrong – I say let’s congratulate them when they do set a good example and assume it was done with the most honorable of intentions.