Rome is my favorite city in the world.  It is truly the Eternal City in the sense that ancient, Renaissance, and Christian history are very alive in the city – at the same time that people go about their work-a-day needs in a very modern, metropolitan area.  We have been to Rome twice and on each visit I have found the interwoven layers of history truly fascinating.  In addition, there is a strong sense of Italian hospitality that invites you to learn and enjoy the history here – a different sense than I have felt in other ancient sites.

To start with, the Rome of today is a vibrant metropolitan area built over ancient Roman and Christian sites.  The city is impressively dotted with beautiful fountains – many of which still utilize the infrastructure of the ancient Roman aqueducts that brought water into the city.  Three terrific outdoor areas include the small plaza and fountain at the base of the Spanish Steps, the magnificent Bernini fountains in the Piazza Navona, and the “Three Coins In A Fountain” majesty of the Trevi Fountain. 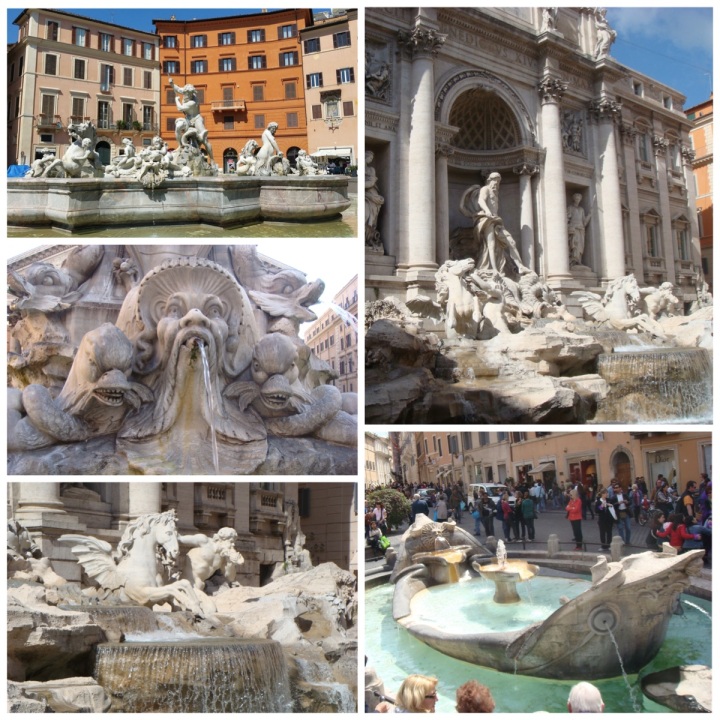 When you think of Rome, you likely think of the Colosseum.  Commissioned by the Roman Emperor Vespasian in 70 AD, the Roman Colosseum is a historical icon known the world over.  Adjacent to the Roman Forum, the Colosseo – as it is known – is easy to reach via the Rome Metro and an absolute must see.  It is incredible to walk into the ancient structure and see the construction up-close.  The missing floor of the stadium reveals the rooms, ramps, and trap door locations that were used for gladiator battles and Roman spectacles.

The Forum is the spiritual, political, and economic capital of ancient Rome.  With structures dating back to 700 BC, the Forum served as the center of Rome for a thousand years.  The temples, court buildings, Senate, and ancient Sacra Via (sacred road) are easily walked through and give you a sense of the triumphal parades, judicial trials, and commercial activity that once happened here.  One interesting small ruin near the center of the Forum is the Temple of Julius Caesar.  Caesar’s body was burned here in a massive funeral pyre and even today, Romans bring fresh flowers to the site.

Above the Roman Forum is Palatine Hill – home to the Emperors of Rome, dating back to the death of Caesar and ascension of Emperor Augustus – his adopted son.  The ruins are much more open here than in the Forum and you can make out the remains of the palaces and gardens that once astounded visitors.  Notable is that the modest Palace of Augustus is still intact and visitors can look into the rooms and view the red frescoes still on the walls more than 2000 years after Augustus took the throne.

Overlooking the Roman Forum from a different angle, is Capitoline Hill – another of the Seven Hills of Rome.  The hill contains a few ancient ruins, but is primarily topped with a gorgeous Renaissance piazza designed by Michelangelo.  Surrounding the plaza – and statue of Marcus Aurelius on horseback – are three palaces which comprise the Capitoline Museums.  The palaces have an amazing collection of ancient & Christian art and host interesting exhibits.  On one trip to Rome, we scheduled a visit here for a tour of an exhibit called ‘Treasures of the Vatican Secret Archives’ which included the papal bull excommunicating Martin Luther (and kicking off the Reformation), the petition from Henry VIII making the Pope to annul his marriage to Catherine of Aragon, letters from Abraham Lincoln & Jefferson Davis during the American Civil War, and the papal bull that launched the Crusades in 1198.

Originally built as a temple to the Roman Gods, the Pantheon – named for Roman Polytheism – later became a Roman Catholic Church.  The ancient, domed structure was completed in Hadrian’s time – about 126 AD.  It is one of the best preserved ancient buildings in the world and the engineering that went into the massive, oculus-topped dome wasn’t matched for over a thousand years.  The pillars at the front of the temple are made of solid granite, and the ellipse in the plaza was hauled here in ancient times from Egypt.  In addition to serving as a Roman Catholic church, the Pantheon is also the burial place of two Italian Kings.

Vatican City is a sovereign state in the heart of Rome and home to the Roman Catholic Pope Francis.  Central to the Vatican is St. Peter’s Basilica – ode to the words of the Confession of St. Peter which said “Upon this rock I will build this Church”.  St. Peter – the first Pope – is buried beneath the altar of St. Peter’s.  Above his remains are an enormous Renaissance Basilica with a massive dome designed by Michelangelo and incredible baroque architectural flourishes (including the bronze altar tapestry) by Bernini.

The Roman Catholic Church has likely the most exceptional collection of ancient art of any museum in the world.  Incredibly rare Egyptian, Greek, and Romans sculptures form the foundation of a terrific half-day tour.  Halls feature incredible paintings, medieval tapestries, and frescoes by Raphael and Michelangelo.  Topping the museum is a visit to the technicolor Sistine Chapel – the inner sanctum of Vatican City – where the Michelangelo paintings are legendary.  The best way to organize a trip through the Vatican Museum is as part of a timed tour group.  Otherwise you will face very long lines. 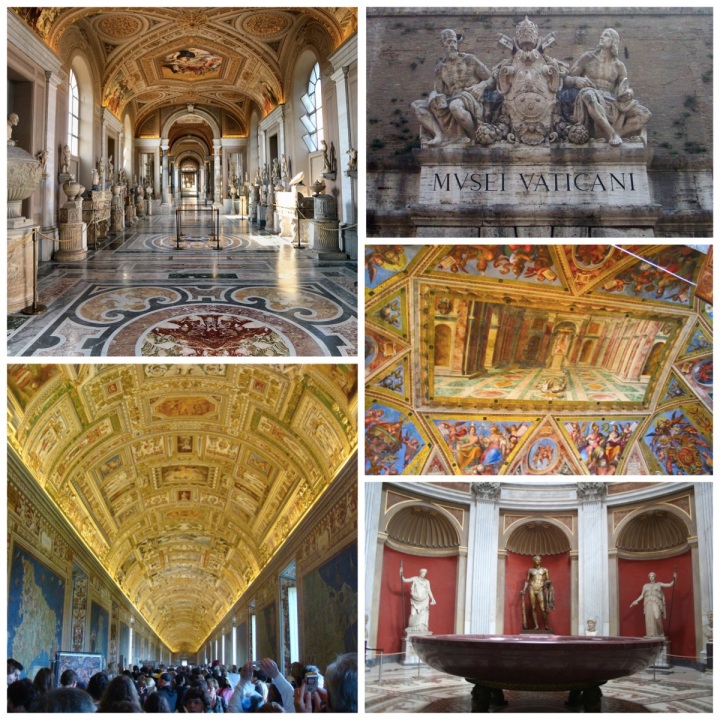 The Villa Borghese is an art gallery in the former Renaissance villa of Cardinal Borghese, nephew to Pope Paul V (reign 1605-1621).  Cardinal Borghese, who apparently believed the only two things worth investing in are amazing art & architecture succeeded on both.  Timed tickets are available to visit the galleries – which feature works by Bernini, Michelangelo, Carravagio, Titian, and Reubens – in the majestic rooms many were originally intended to be displayed in.  The integration of art and gallery are unlike any museum we have visited anywhere else.