I worked in brand marketing during my career and have an affinity for old print advertising.  On my personal Facebook feed, I spent the last 25 days countdowning to Christmas with vintage ad each day of the month.  The illustrations and products really give a fun glimpsed into Christmas Past.

Collecting and posting these ads might seem like kind of a funny thing to spend one’s time on, but it is easy to find time for a silly project like this when you are enjoying your life of FIRE.  It is one of a dozen silly, but highly enjoyable things I spent my time on in 2017.  In an upcoming post, I will give you a glimpse of what it looks like when you have a whole year to goof-off as much as you want.

In the meanwhile for posterity’s sake as much as anything, I thought I would collect and share the Vintage Christmas Ad Countdown posts here:

🚂  Christmas Ad Countdown #25 – Getting an early start this year with this great old ad from the NY Central RR.  There is something very nostalgic about train travel during the holidays and this 1953 ad captures it well … “Give tickets … the gift that brings them HOME!” 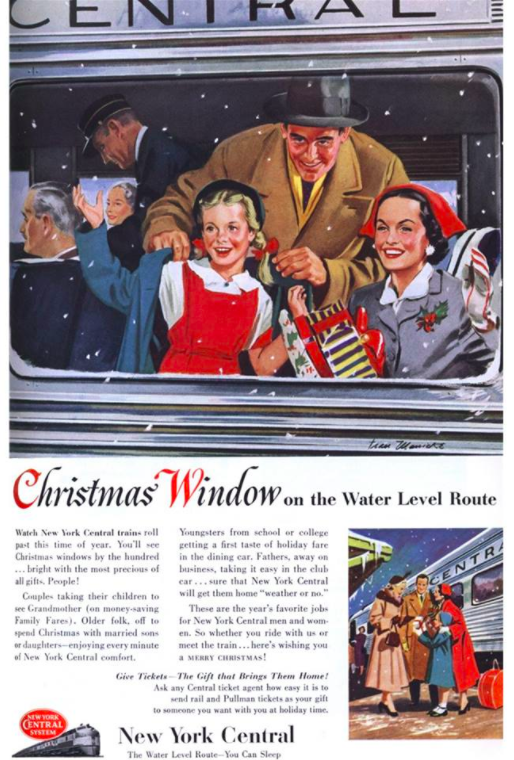 🎄 Christmas Ad Countdown #24 – Warm weather this weekend to put out some lights.  A cup of Maxwell House keeps everyone warm as they string the big evergreen in this 1939 ad.  Maxwell House was the top selling coffee in the 1930s – I wonder what the #1 brand of coffee is today?  Starbucks?

🚲  Christmas Ad Countdown #23 – Hard not smile at the unbridled excitement the boys and girl show for this 1957 Schwinn.  Mom & Dad stand on the porch with the look of satisfied pride only Santa knows.  They would probably have had to give an iPhone X to get the same reaction today!

🎄 Christmas Ad Countdown #22 – General Electric recently announced it was getting out of the light bulb business, but in 1947 they were locked in Christmas combat with NOMA for the opportunity to light your tree and yard.  Here is their glittering Post-War collection of C7, C9, G14 “Globe” and C4 “Pine Cone” Lights. 🎄 Christmas Ad Countdown #21 – Shiny Brite ornaments are a Christmas tree institution.  The bulbs featured in this page from the 1950 Sears Catalog are highly collectible.  Christopher Radko bought the Shiny Brite brand several years ago and has reissued many of the original designs.

🍺 Christmas Ad Countdown #20 – This exceptional ‘Beer Belongs’ Christmas illustration is one of my favorites and worth zooming in on.  Published in December 1954 and drawn by the legendary Haddon Sundblom, it is part of a campaign that ran for a dozen years – patterning beer as a respectable part of “Home Life in America”. 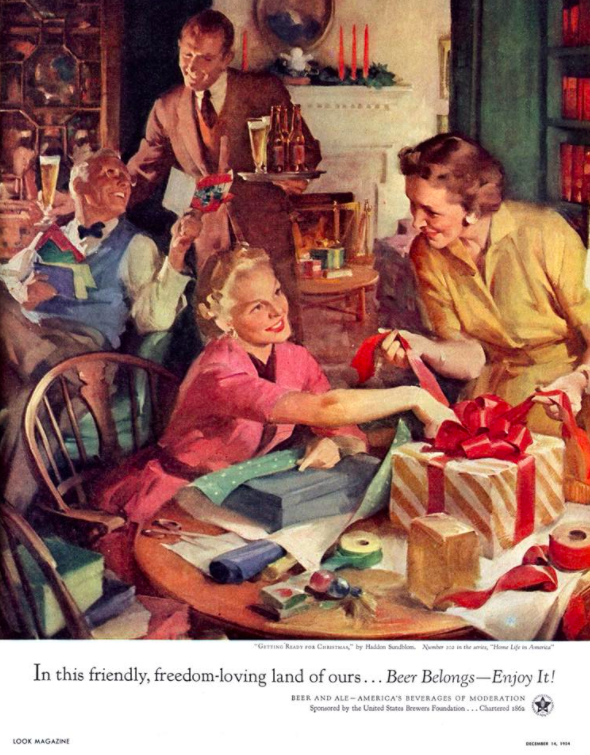 📻  Christmas Ad Countdown #19 – Chesterfield cigarettes sponsored some of the biggest radio stars during the medium’s 1930s-1950s golden era – including mega-star Bing Crosby.  This 1950 ad brings together all of the Chesterfield radio stars with the look of Bing’s 1945 ‘Merry Christmas’ album and features a special Christmas carton for gift-giving.

🍭 Christmas Ad Countdown #18 – The letters in the brand PEZ comes from the German word for peppermint, “Pffefferminz”.  It was introduced in 1927 in Vienna – originally as a mint to help adults stop smoking. The kid-focused dispensers debuted two decades later and Santa Claus – introduced in 1955 – remains a top seller.

🚂  Christmas Ad Countdown #17 – Santa Claus and a Pennsylvania Conductor check on this “Little Miss” sleeps beside her Christmas stocking in her “cozy roomette”.   Cute ad, but Christmas Eve seems like an awful time to be stuck on a train.  Thankfully, the copy promises you will “step into cars aglow with good cheer and good fellowship”

❄️  Christmas Ad Countdown #16 – Most known for his Christmas work with Coke, this bright party scene was done by Haddon Sundblom for rival 7-Up in 1957.  Love the playful look of the young couple meeting over a holiday bite & laugh at the buffet. 🌟 Christmas Ad Countdown #15 – There are a lot of cars advertised at Christmas time and this 1955 Cadillac ad makes the case for a really big “December to Remember”.  To me, this couple screams Cary Grant & Marilyn Monroe, but they weren’t associated with the Cadillac brand in anyway.  I guess it is meant to simply be a generic Mad Man going overboard at Christmas with his young darling. 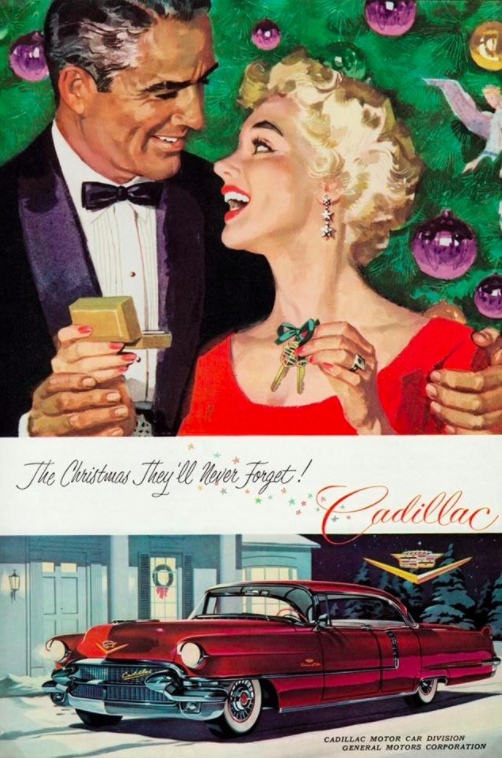 🚂 Christmas Ad Countdown #14 – As soon as there were Christmas trees, people started putting winter villages underneath.  Joshua Lionel Cowen electrified the holiday tableau in 1905 – circling the tree with his Lionel Trains.  By mid-century they were a Christmas standard and positioned as a way for men “to get their head out of the clouds and be down on the floor” with there sons.

🎁  Christmas Ad Countdown #13 – This gun ad might seem laughably retro today, but guns continue to be a huge gift category.  Gun stores sold enough guns this past Black Friday to arm the entire US Marine Corps.  If Santa runs into trouble on his midnight run, you can bet he’ll be ready to unpack the goodies. 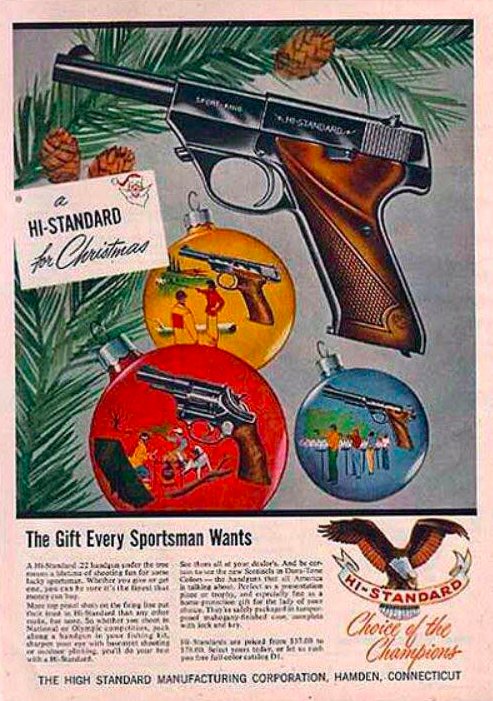 🎆  Christmas Ad Countdown #12 – I’ve shared Haddon Sundblom illustrations already a few times, but no Holiday ad Countdown would be complete without some of his famous Coca-Cola Santa Claus ads.  Starting with the description in Moore’s A Visit From St Nicholas, Sundblom’s illustrations from the 1930s-1950s became the definitive style guide for Santa Claus & his iconic red suit.

🏁  Christmas Ad Countdown #11 – Santa’s trading the eight reindeer for some real horsepower in this vintage ad from Hertz. The jolly old elf will arrive in style with this frost white 1963 Chevrolet Corvette, although there seems to be quite a bit less space for his bag than in the sleigh.

🍴 Christmas Ad Countdown #10 – Christmas is a time for holiday romance and that is the focus of this dramatic 1961 ad from Community.  The copy encourages young men not to wait to gift silver service to their Brides for Christmas.  She seems appreciative and I expect little ones may be expected before next Christmas.  The copy says this fancy silverware is sold only through jewelry stores.  I wonder how long that was a thing?

🔥 Christmas Ad Countdown #9 – This 1955 ad from Zippo Lighters features a terrific Rockwell-esque illustration of the kids getting a demonstration from the shopkeeper. I’m not sure selling lighters to small kids is a good idea from a safety / liability perspective, but I like that the sweater-wearing dachshund also seems like he might want to buy one.

🎶  Christmas Ad Countdown #8 – This 1921 Victrola ad is the oldest full-color ad I have in my digital collection. Victrola made its name with wind-up gramophones, and in the pre-radio age it had to be absolutely amazing to hear the multitude of singers, orchestras, and other performers that could be brought into your home with this holiday treasure.

🎁 Christmas Ad Countdown #7 – This is the last work week before Christmas, which means that there undoubtedly be a run on Scotch Tape in the office supply closet. This Scotch Tape ad from 1952 shows how useful these magic rolls of cellophane can be as “Your All-Star Holiday Helper”.

🔥  I’m not sure why using Scotch Tape to attach Christmas Cards to your dry, prickly evergreen didn’t catch on as a “Friendship Tree”, but I like the image of Bing smoking a pipe over this potential fire hazard. 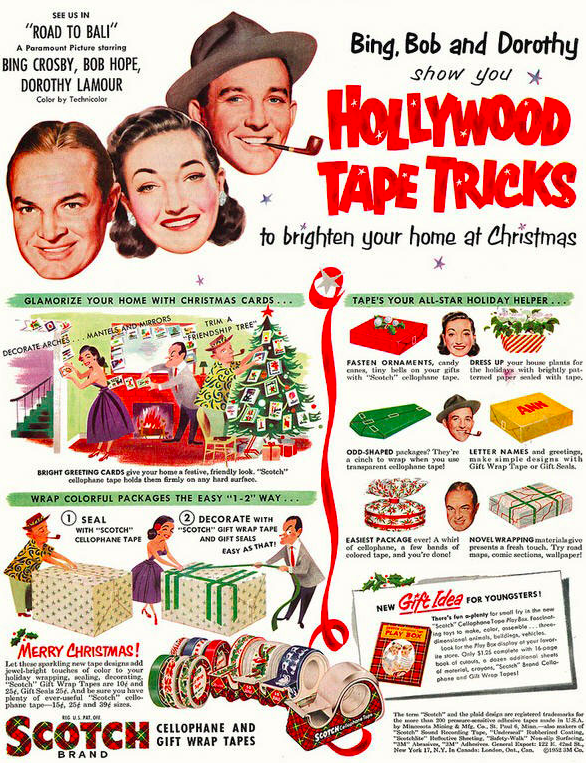 🎁  Christmas Ad Countdown #6 – What amazing gift might capture the hearts and minds of shoppers today – the way this 1951 Smith Corona Typewriter has spellbound these people? Never mind, I’m not sure anyone was ever this excited about a typewriter anyway!

🍪  Christmas Ad Countdown #5 – It’s not too late to still make a few “gay” Christmas cookies and this 1954 ad for General Mills’ Gold Medal Flour delivers a festive new recipe. At the bottom of the ad, Betty Crocker herself says that “A little of your love goes with every gift you bake yourself”.

⭐️  Christmas Ad Countdown #4 – This might be the first Christmas in 100 years without Santa Claus sitting on his throne in Downtown Minneapolis. This 1951 ad harkens back to Dayton’s Department Store’s reign as a true Minnesota treasure and the state’s Capitol of Christmas. While Dayton’s offspring (Target Stores) became much more successful than its parent, something important was lost this time of the year.

⛄️  Christmas Ad Countdown #3 – I was the brand new Marketing Manager on Pillsbury Shape Cookies when we shot this ad on an un-Christmasy hot & sunny August day in 1999. The set was a house on Long Island NY. I recall the ‘mom’ really hitting it off with her ‘daughter’ at the shoot – although they were both actors who had just met. The Agency surprised us with the cookie garland idea during post-production. It really makes the ad festive and unique.

🎅🏻  Christmas Ad Countdown #2 – Santa is probably spending today sharpening the runners on his sleigh for tomorrow’s midnight run. This magically illustrated 1948 ad from 7up shows Santa on his Christmas Eve journey with his mighty reindeer team pulling the sleigh and a gi-normous bottle of what later became known as the ‘Un-Cola’.

🎉  The slogan “You like it, it like you” was meant to convey it was easy on your stomach. It was later replaced by “7-UP for 7 hangovers” (no kidding) 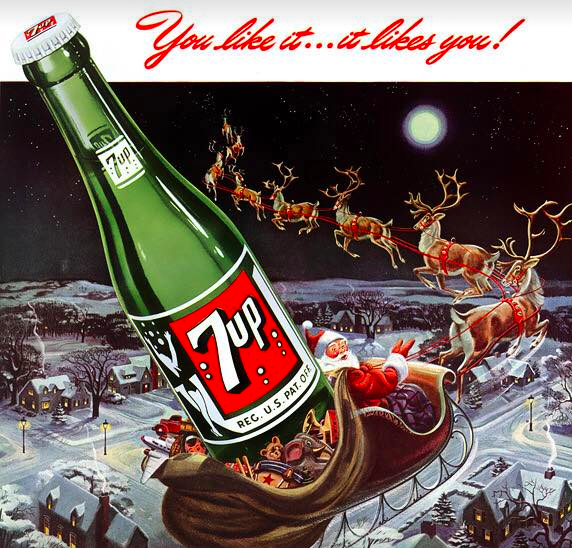 ❄️ Christmas Ad Countdown #1 – This magnificent 1945 Coca-Cola ad packs an emotional punch. Perfect for Christmas Eve – the final day of this Ad Countdown – the heartwarming illustration radiates the warmth of home & family at Christmas with a WWII veteran getting a homecoming that could have been “only in his dreams” during his service to our nation and defense of our way of life. 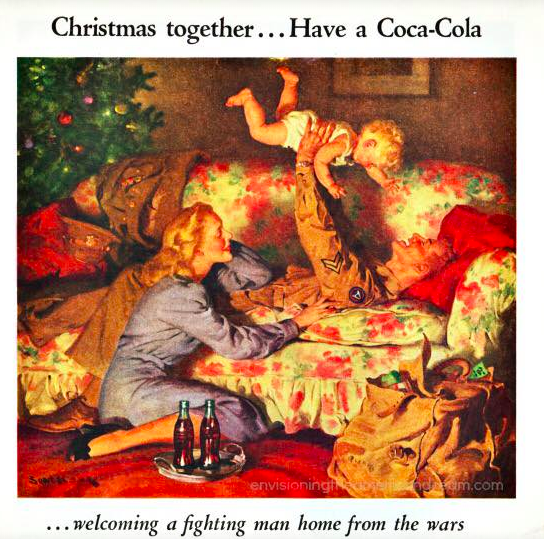 Hope you enjoy seeing these old ads as much as I enjoyed collecting them!