Our son graduated from high school in 2016 and we let him choose a big international trip to mark the occasion.  No surprise that the boy who grew up loving Nintendo, Pokemon, and electronics chose Tokyo!  I’ve written a couple posts about it – packing for the trip & Japan’s unique retirement perspective – but I never have done a destination guide to the sites.

Here are NINE places to visit in Electric Tokyo, Japan …

#1 Senso-Ji Temple – We started our visit to Tokyo with a stop at the ancient Bhuddist temple, Senso-ji.  Opened in 645 AD, this is the spiritual heart of Tokyo the way that Westminster Abbey might be in London, or Notre Dame in Paris.  It was an easy Metro ride to reach from our hotel to the Ueno district – which included the fantastic Ueno Zoo, the National Museum, and a short walk to the east … the Tokyo Skytree.  Outside the temple, their is a long shopping lane with a lot of interesting booths filled with toys, souvenirs, and jewelry.

#2 National Museum – A short walk from Senso-ji Temple brought us Ueno Park, which is the Central Park of Tokyo.  There are a number of museums here – for art, science, and nature – but the National Museum is a real standout.  With over 100,000 artifacts, it is a national treasure of the archeology and history of the ancient island nation.  It was a great place for us to familiarize ourselves with a culture we didn’t grow up studying in the USA. 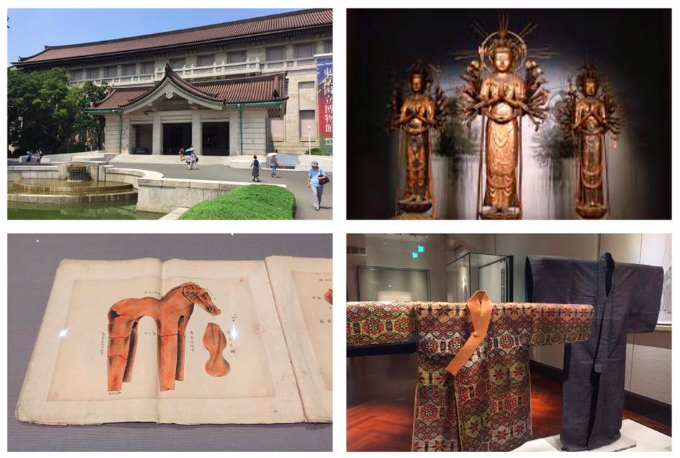 #3 Imperial Palace & Gardens – Yes, Japan has a bonafide imperial family and they live in a palace in the heart of Tokyo.  Generally closed to the public except on New Year’s and the Emperor’s Birthday, you can see the Imperial Palace from the park and get a great snap of the private residences framed by this beautiful bridge. 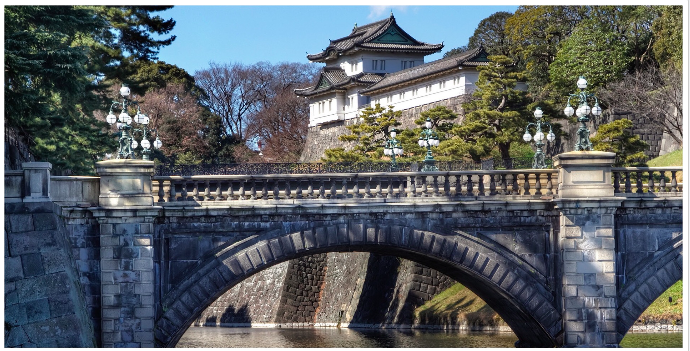 The imperial gardens, just to the north of the palace gate & bridge are open to the public and are enormous.  Divided into different ‘rooms’ and scenes, the gardens are lush and green since Japan is a tropical island.  I had the good fortune of catching a procession of royal carriages leaving the Imperial Palace as they wound down through the gardens.  I was told they were going to the train station where they frequently pick up Foreign Ambassadors to bring them to the palace for meetings with the Emperor.

#4 – Shibuya Station / Crossing – While the palace & gardens are quiet spaces in Tokyo, most of the city looks like Times Square.  Instead of just one Times Square, their are multiple Times Squares all over the city of 39 million people (2x NYC).  One of the craziest areas is Shibuya, which is famous for being the busiest intersection in the world with thousands of people scramble across every 2 minutes.  There’s a great second-floor Starbucks in one of the buildings facing the streets where you can watch the Shibuya Scramble in all its glory.  In front of the nearby Shibuya Station, you can pat the statue of Hachiko – the dog who came to the station to meet his master everyday.  Even for 10 years after his master passed away! 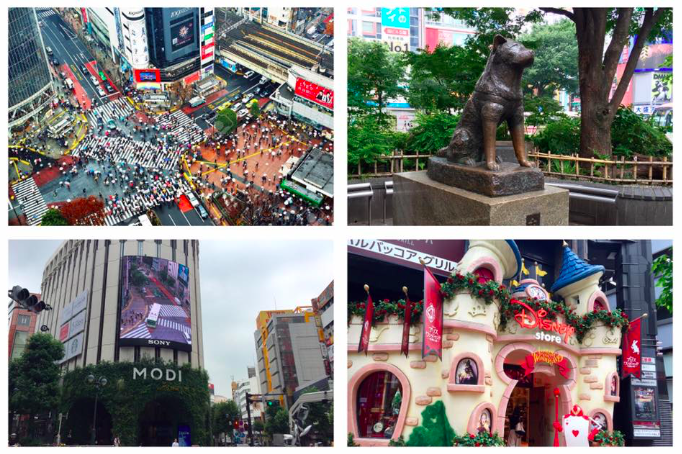 #5 – Shinjuku Station / District – Speaking of busy, Tokyo’s Shinjuku Station is the busiest train station in the world where 5 rail lines meet. The area around the station is a classic ‘Electric City’ at night with thousands of neon & LED signs.  We stayed about 10 city blocks away from Shinjuku Station and liked being in this area.  There was good shopping, interesting restaurants, and a huge entertainment district.  Don’t worry about the noise – even in the middle of Tokyo things are very quiet.  The most unusual thing about being here is that you will pass hundreds of thousands of people each hour, but you might only see a handful of other Westerners.  Unlike many cities of the world, there doesn’t seem to be a lot of tourists here.

#6 – Shinjuku Robot Cabaret – This off-beat attraction in Shinjuku gets top marks on TripAdvisor, although you might ask yourself what you are getting into.  Resist your reservations and check out what might be the most Japanese combination you can possibly find: giant fighting robots, neon & lasers, and bikini-clad dancers / Shogun drummers.  If it sounds weird, it definitely is.  Bring some earplugs if you must, but this was a PG-13 highlight of our trip. 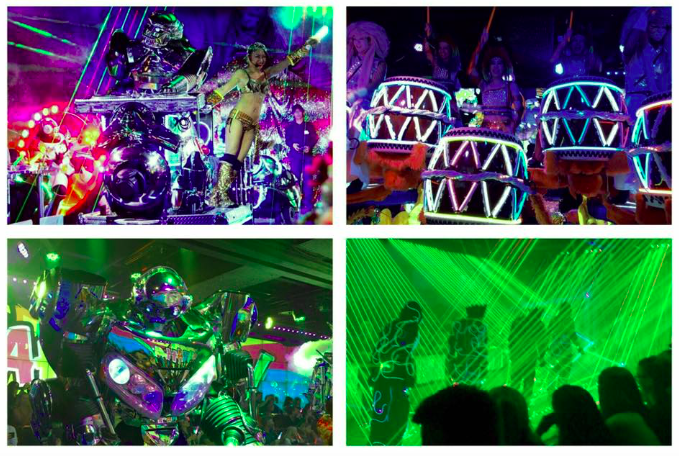 #7 – Tokyo Tower & SkyTree – The Japanese culture loves Western influence, so much that they built a replica of the Eiffel Tower in Tokyo.  Just a little taller than it’s sister in France, the Tokyo Tower was opened in 1958 and serves as a communications tower.  It owes its brightly colored orange & white color scheme (which helps it stand out on the Tokyo skyline) to the country’s aviation laws.  Across town (but not pictured here) is the newer Tokyo SkyTree that is also an interesting visit.  It opened in 2010 and is the world’s tallest free standing structure.  From both towers you get a terrific view of how big Tokyo really is! 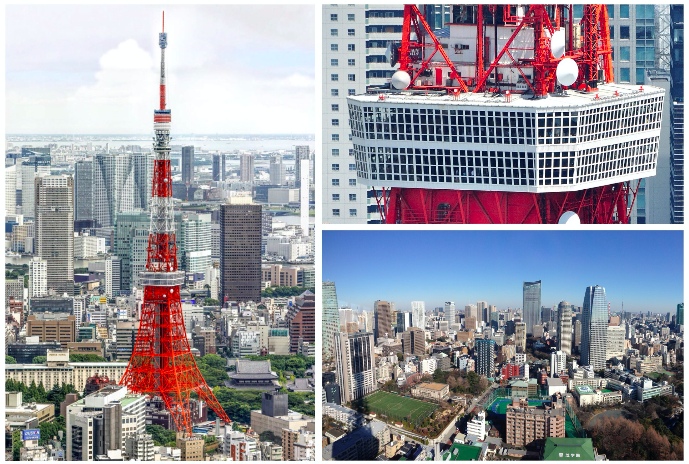 #8 – Tokyo Disney’s DisneySea – Not owned by the Walt Disney Company (licensed), but every bit as Disney as anything in the USA is the Tokyo Disney Resort.  An easy train ride from Tokyo Station, we spent a very hot & humid day at DisneySea, which flank’s Tokyo Disney’s Magic Kingdom.  We were really impressed with the layout, theming, and attractions.  The standards of design, entertainment, and cleanliness were the best in any Disney park we’ve seen anywhere in the world.  The Journey to the Center of the Earth ride is rated by many theme park goers as the best attraction in the world.

#9 – Getting Around Tokyo – You might be worried about how you’ll get around Tokyo without a guide, but we founded it incredibly easy to use the city’s Metro trains.  We used Google Maps on our iPhones to guide us to the right stations and know how much fare to pay, but there are also helpful tellers at each station.  Signs in the stations are presented in both Japanese characters and our alphabet which makes getting around a cinch.  The trains are quite crowded during rush hour, but we never felt smashed into other people.

Some other “honorable mention” areas of the city that we visited are:

Other areas of Tokyo that you have visited?  Would like to see?