Before the summer is out, I wanted to share some of the highlights from our trip to Jerusalem & the Holy Land.  This (along with our trip to Japan) is the biggest trip we’ve taken since we early retired.  We tagged on a fun side trip to ancient Petra in Jordan.

In many ways, this was perhaps the most enlightening trip we have ever taken with respect to learning about ancient history, world religions, and current political strife in this historically complicated part of the world.  We took the journey as part of a Lutheran Church group from Minnesota in the USA.

We had never done a group/bus tour before, but it was a terrific way to get around an area of the world that has a lot of restrictions. That said, we did meet a number of other travelers who had rented cars and were exploring the country mostly independent.

Starting in Jerusalem, the story of the three faiths that converge in this city start at the Western Wall. At the base of Temple Mount, these massive stones that were constructed by Herod the Great two thousand years ago comprise the holiest site in Judaism.

Security (and a sense of fashion modesty) is especially heavy in this area of Old Jerusalem, although it is as much a joyous place as it is reverent. We visited the Wall several times during our stay and saw families celebrating bar mitzvahs, soldiers raucously enjoying the start of the Shabbat/weekend, and many others in focused prayer.

This mosque on the top of Temple Mount – where the Jewish Temple(s) once stood- is a very sacred site to Muslims around the world. The old city of Jerusalem is occupied by a Israel – they carry the guns around here – but Jordanians act as ‘monitors’ on Temple Mount. Mostly they seem to monitor how modestly people (especially women) are dressed when visiting.

The mosque and a Temple Mount grounds are quite beautiful and serene in the morning, but non-Muslims are not allowed inside the mosque itself. We met a Palestinian-American from Brooklyn who shared some pictures he had taken with us. Our tour guide shared that some Jews would like to build a new Temple on the Mount, but that it is not necessarily a broadly accepted view.

#3 CHURCH OF THE HOLY SEPLUCHRE: 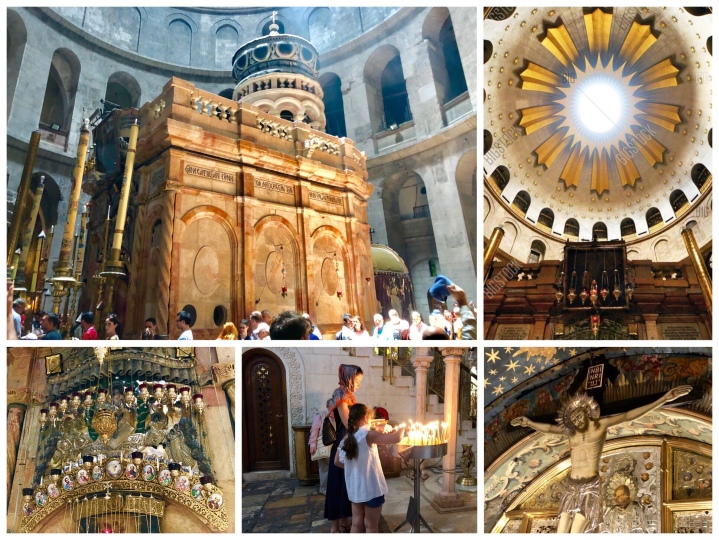 Built in 300 AD on the hill believed to be the Christian New Testament’s Golgotha, the Holy Sepulchre is held as the holiest place in Christendom. The dark and ancient church is overseen by six different denominations, whose disagreements in how the property is managed is quite infamous. They actually have a Muslim man lock & unlock the church each day.

Lines were long to enter chapels representing the final Stations of the Cross in the church at the end of the Via Dolorosa. We were here in a July which is an off season time to visit. Still, a 60-90 minutes wait to reach the Chapel of the Cruxifixction or the Tomb of Jesus were typical.

The city is divided into quarters representing the different faiths that converge in the city. The Muslim Souk (market) seems to be the biggest in all of the quarters and had the most foreign and authentic shopping. Depending on your personality, you will love or hate bargaining with the traders here.

The Jewish Quarter was the most upscale of the quarters and pretty to walk around or have lunch in. The Christian Quarter has a few churches (including the Holy Sepulchre), but it is mostly shopping – and mostly pretty cheap souvenirs. There are some nice jewelry and carved olive wood figures that can be bought here, but mostly it’s cheap trinkets. The small Armenian Quarter serves the Greek Orthodox community, but didn’t seem to have any markets there.

#5 BETHLEHEM – CHURCH OF THE NATIVITY:

This visit was a high point of the trip for us. Bethlehem sits very close to Jerusalem – kind of an ancient ‘suburb’ of the bigger city.  Our visits to both the Church of the Nativity with its mysterious under-altar grotto marking the site of Jesus’ birth and the nearby Shepherd’s Field Chapel were really meaningful.  I’m sure we will reflect on them every December the 25th in the future too!

That said, these simple, holy sites – that are so familiar to Christians around the world – are quite different in the 21st Century. Bethlehem is surrounded by a very large wall that separates Israeli and Palestinian-controlled areas.  It’s not quite the sleepy village picture you might come here hoping too see.  But, that doesn’t stop thousands of pilgrims from still  coming here each year. 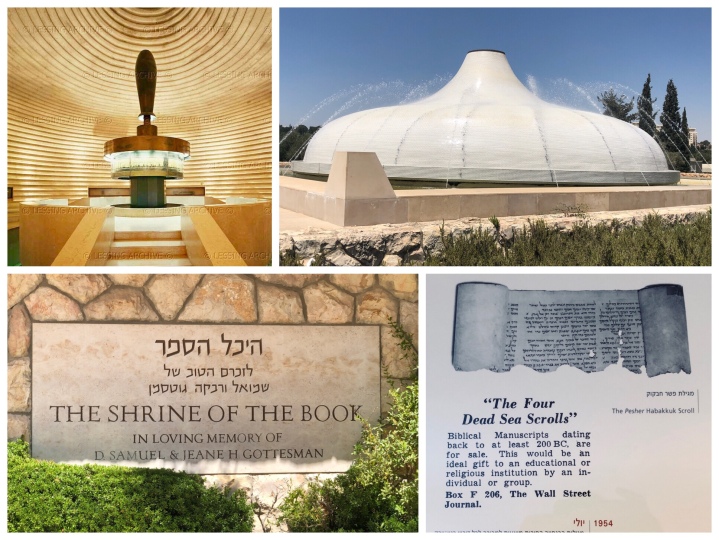 The Dead Sea Scrolls were a major archaeological find in the 1940s and they are exhibited at the Book of the Shrine, in a special building meant to evoke the ‘cap’ of one of the clay jars that protected the Scrolls in the desert. Dating back to 100-200 BC, these are the oldest known copies of Bible writings.

The Israel Museum is the national museum for Israel and well worth a visit. The history here goes back thousands of thousands of years (one figurine is said to be 233,000 years). There is also a moving museum remembering the horrors of the WWII Holocaust.

Ever floated on water? The Dead Sea is the lowest point in all of the world and so salty that anyone can easily float in its waters. More than 8x as salty as the ocean, the only life in the Dead Sea is microbial.

We enjoyed a quick dip in the salty waters at one of the beach resorts on the Israeli side of the Sea (which is really more of a lake than a sea). You simply ‘sit down’ in the water as if you were plopping in a beach chair and immediately float. We only stayed in the water for a short period of time. At such a low altitude in July, the sun is absolutely scorching! 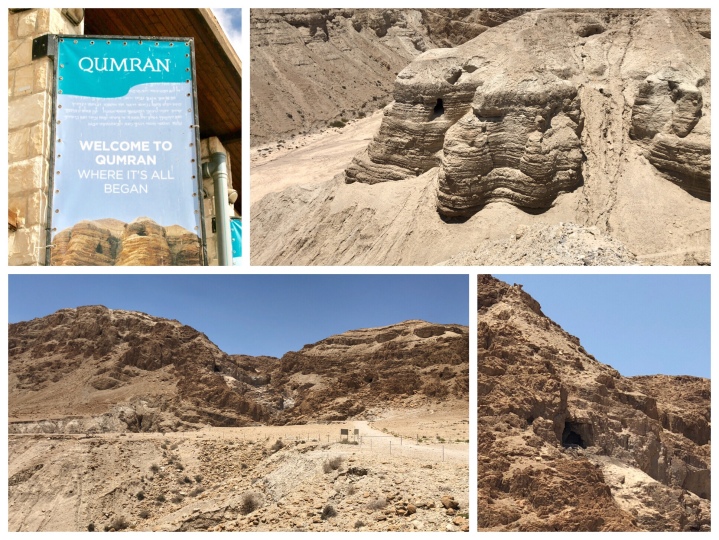 Right near the Dead Sea are mountains pocked with caves where the Dead Sea Scrolls were originally found. There’s not a lot to see here, but it is worth a stop off on your way to the Sea (or heading to Masada in the south). It’s quite amazing that the scrolls were so well protected here for so long. They sat undisturbed for over 2,000 years.

Before this trip, I knew very little about the Kingdom of Jordan and had never heard anything about the ancient Roman city of Jerash. Not as big as Pompeii in Italy or as grand as Ephesus in Turkey – two other large Roman cities we have visited – Jerash is a terrifically preserved city with a magnificent triumphal Arch named for Hadrian, a large Temple to Zeus, an oval-shaped forum, a medium sized Roman amphitheater, and an ancient hippodrome that stills features chariot races on Wednesday nights! 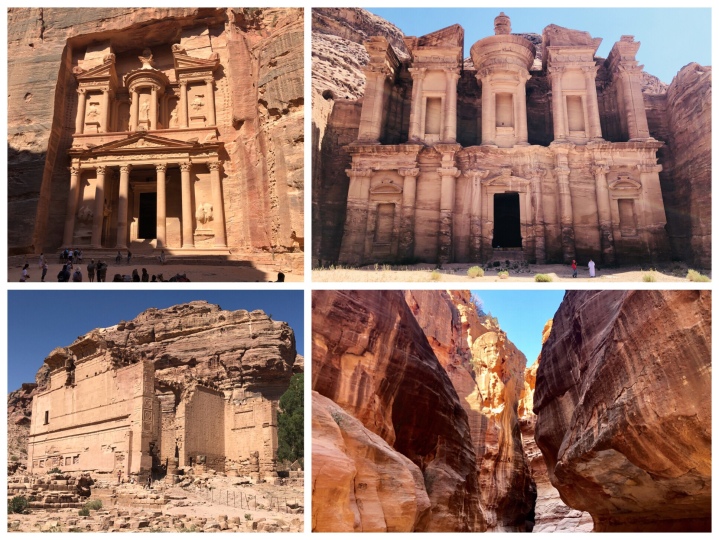 If you want to play Indiana Jones, the ancient ‘lost city’ of Petra is the place for you. We arrived near Petra in the evening and stayed at a Bedouin Camp overnight. In the morning, we descended into the sandstone Siq of Petra between formations rising nearly 40 stories above us.

The sandstone formations dramatically open into the ancient Nabatean city of Petra with its stunning Treasury, Royal Tombs, and Monastery. These treasures weren’t built – they were magnificently carved into the cliffs here. The highlight for us was a 900+ step climb up the cliffs in the back of sure-footed donkeys. Let me tell you that anyone whoever said “get your ass in gear” has never seen one of these speedy creatures gallop up timeworn sandstone steps!

I’d be remiss if I didn’t include something here about safety & security. It’s the question that most people ask us about the trip.

Overall, we felt safe in the trip although it is a very different world over there and you can’t ignore what you are seeing. In the Golan Heights, we saw heavy artillery fire across the nearby Syrian border. Our buses were inspected (inside & out) by machine gun toting soldiers, and we passed several times through the concrete, barbed wire, and iron tower birders that separate Israeli & Palestinian occupied lands.

That said, we never felt personally in danger and our guide, Ruby, kept in touch with the main office of her tour company in case anything might come up.Our experience as foreigners is best summed up by the comments of an Arab trader in Old Jerusalem. Asking where we were from, he said “We love Americans. Especially when you BUY things from us!”