In addition to writing a couple articles a week for this site every week, I also enjoy writing a Christmas Countdown that I post on my personal Facebook feed.  I’ve posted my ’25 Ads of Christmas’ for a number of years and feature vintage advertising with great illustration.

This year, I did something different: I researched 25 ‘Classic Toys’ and wrote a little bit about the history of each.  Just as I shared last year’s countdown here (LINK), I thought I’d collect this year’s and share it here too!

🚂 Classic Toy Countdown #25 – In 1905, Joshua Lionel Cowen first circled Christmas Trees with his electrified Lionel Train. Wind-up trains had been popular for decades, but Lionel made Christmas “unforgettable” and became a toy people continued to play with into adulthood! 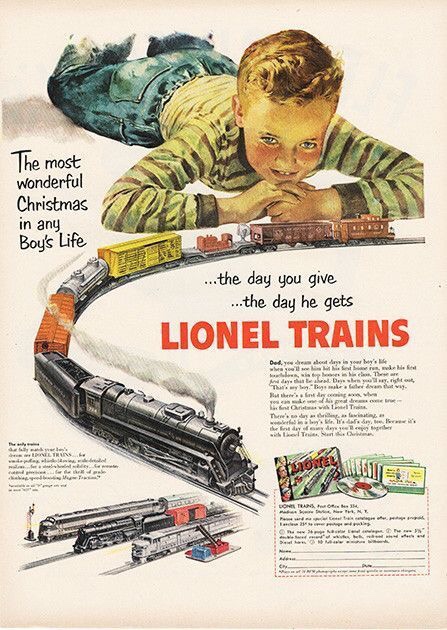 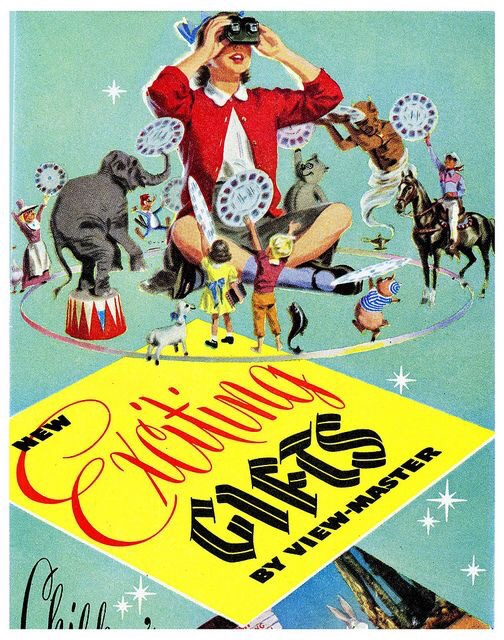 🎅🏻 Classic Toy Countdown #23 – Originally sold for just $3, the Radio Flyer wagon was introduced in 1923 and remains a staple of childhood (now $79 on Amazon). This all-American Classic was invented by Antonio Pasin, a 16 year old immigrant from Italy, who settled in Chicago.

🎁 Classic Toy Countdown #22 – The Slinky was accidentally discovered by engineer Richard James in 1943 when he was researching springs for maritime shipping. He knocked one of his prototypes from a shelf and it walked down in a way only a Slinky can. First sold at Gimbel’s in Philadelphia, he sold hundreds in his first few minutes demonstrating the toy. 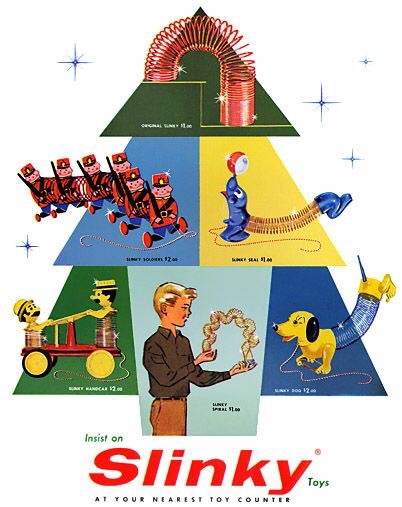 🌲Classic Toy Countdown #20 – Bouncier and more stretchy than rubber, Silly Putty was independently discovered by competing WWII engineers at GE and Dow. Created by dropping boric acid into silicone oil, it was a failure as a military project. Discovered by marketer Peter Hodgson in 1949, it was brought it to market as a toy and became a worldwide phenomenon.

💡 Classic Toy Countdown #19 – Lite Brite was invented by a toy design firm and licensed to Hasbro in 1967. Parents have been stepping on the brightly-colored pegs ever since. The largest Lite Brite display ever created (with 597K pegs) is on display in St Paul”s Union Depot.

🤠 Classic Toy Countdown #18 – Daisy Outdoor Products originally built steel farm windmills, for which they offered the original BB Gun as a promotional premium. Introduced in 1938, the Red Ryder – named for a comic strip cowboy – was designed to look like Winchester rifle.

🚲 Classic Toy Countdown #17 – Introduced by the Louis Marx Company in 1969, the Big Wheel was positioned as a safer alternative to a tricycles for small kids. The relatively large size of the front wheel generated significant speed for every crank of the pedals, similar to a high-wheel bike of the 1800s. 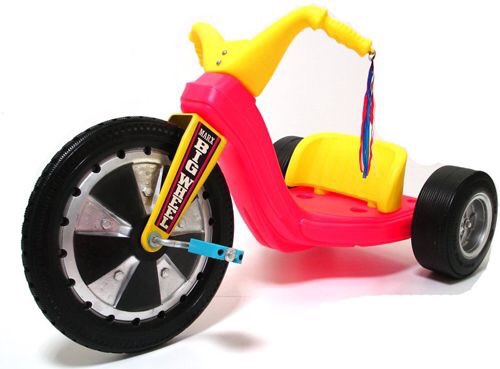 🚌 Classic Toy Countdown #16 – Fisher-Price Little People exploded in popularity as the removable ‘cast’ of 1959’s School Bus. Prior to then, the barrel-bodied, peg people had been attached to pull+along toys, but once freed from vehicles they became story figures in popular “Play & Carry” sets including the family farm, family house, airport, parking garage and more. 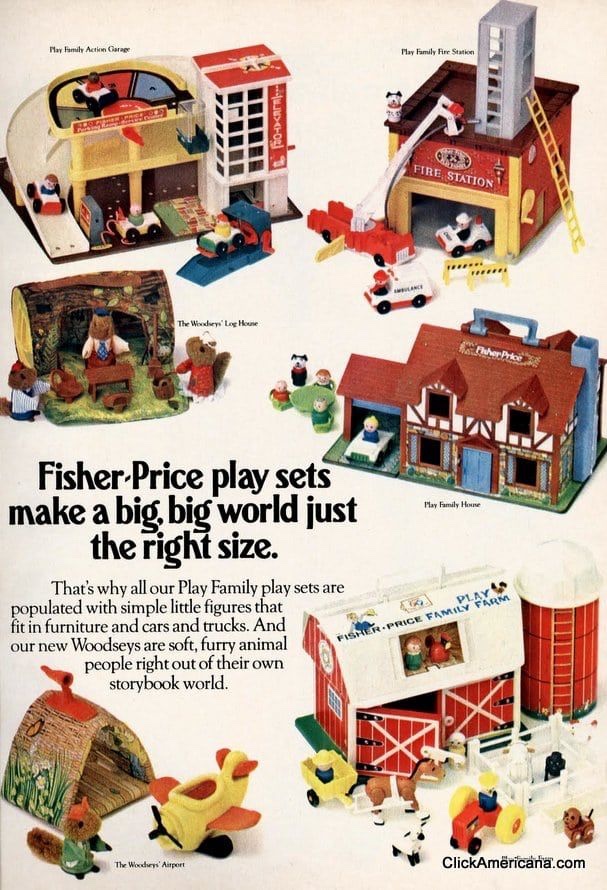 🎅🏻 Classic Toy Countdown #15 – Originally a cylinder-shaped toy called ‘Syco-Seer’, the Magic 8 Ball was inspired by inventor Andrew Carter’s mother, who was a psychic. It came to stores in 1950 as a devilish, liquid-filled ball with a 20-sided fortune telling die inside.

🌲Classic Toy Countdown #14 – The simple log cabin has an important place in American history, still it might be a surprise that it was Lloyd Wright, the famed architect Frank Lloyd Wright’s son that invented Lincoln Log building sets in 1918. The notched & interlocking redwood logs are modeled after his father’s ‘earthquake-proof’ design for Tokyo’s Imperial Hotel. 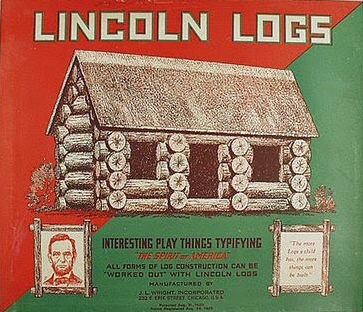 📖 Classic Toy Countdown #13 – There have been over 2 billion Little Golden Books published since their intro in 1942. Originally published by Western Printing in my hometown of Racine WI, the colorful story books sold for just 25 cents, allowing them to be affordable “for any child, not just ones with wealthy parents.”

💡 Classic Toy Countdown #12 – Introduced for Christmas 1963, Kenner’s Easy-Bake Oven sold a half a million units in its first year. Baking heat was supplied by two 100 watt incandescent bulbs. The bulbs were replaced by a dedicated heating element in 2011. 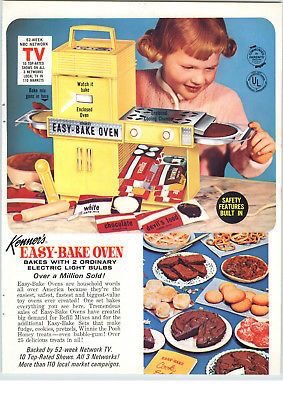 🌟 Classic Toy Countdown – 12th Day of Christmas BONUS – Sir David Brewster, a celebrated figure of the Scottish Enlightenment, patented the kaleidoscope “for creating patterns & forms of great use in the ornamental arts” in 1817. Over 200,000 of them were sold in their first 3 months on the market, however 99% of them were counterfeits. Since then, innumerable new varieties have been marketed including these vintage stocking stuffers!

🎁 Classic Toy Countdown #11 – Play Doh was invented by a Cincinnati soap company as a wallpaper cleaning putty for coal dust. As homes stopped burning coal after WWII, they found a new use for it as colorful modeling clay from a family relative that was a nursery school teacher. They began selling it as Play Doh in 1956 and were multi-millionaires within their first 2 years.

⭐️ Classic Toy Countdown #10 – Glamorous Barbara Millicent Roberts (her full name) was said to be born in Willows, Wisconsin. Her New York City Toy Fair debut happened in March 1959 where she sported a ponytail & swimsuit. Since then she has had 180+ careers and is the best-selling doll globally. 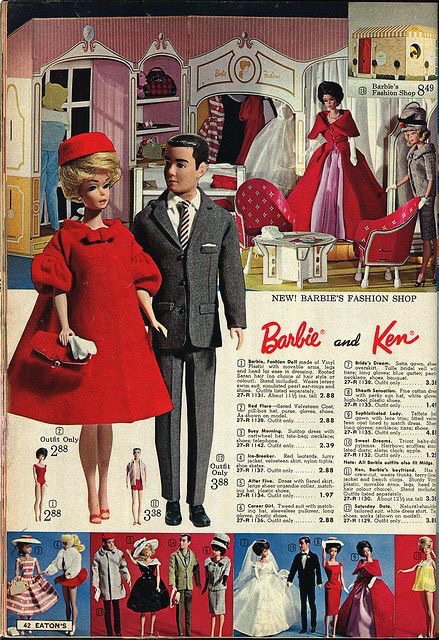 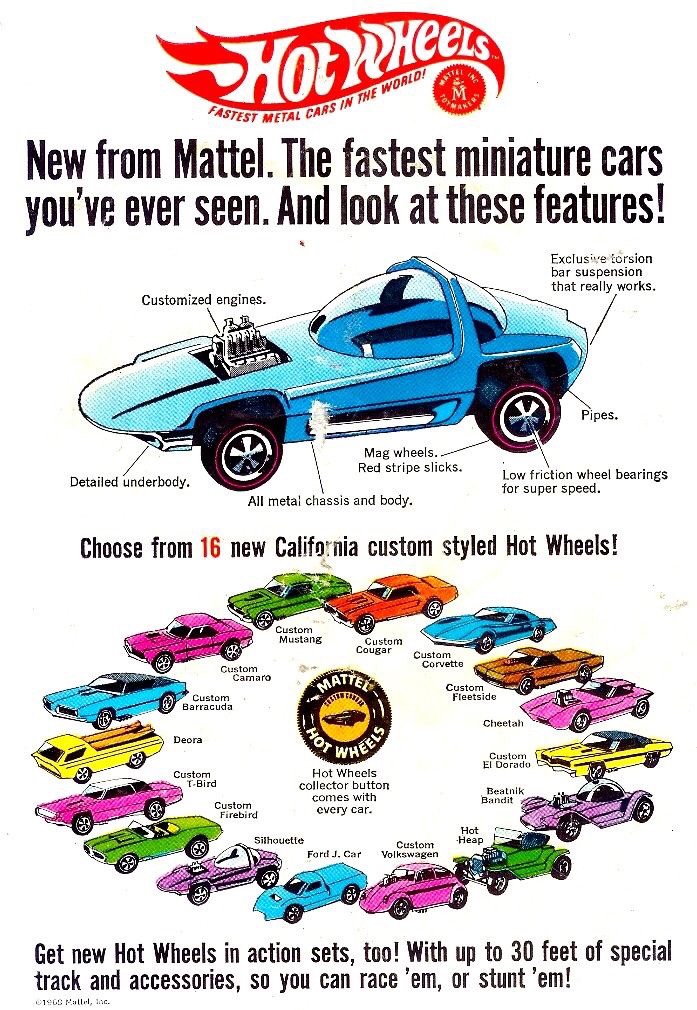 🏈 Classic Toy Countdown #8 – Released for Christmas 1977 exclusively through Sears, Mattel Electronics launched the handheld gaming revolution, first with Auto Racing, and then the mega hit Football. Red LED blips traveled across the 9-yard football field like magic. Football II with passing debuted a year later – with a headphone jack so you could play under the covers in bed! 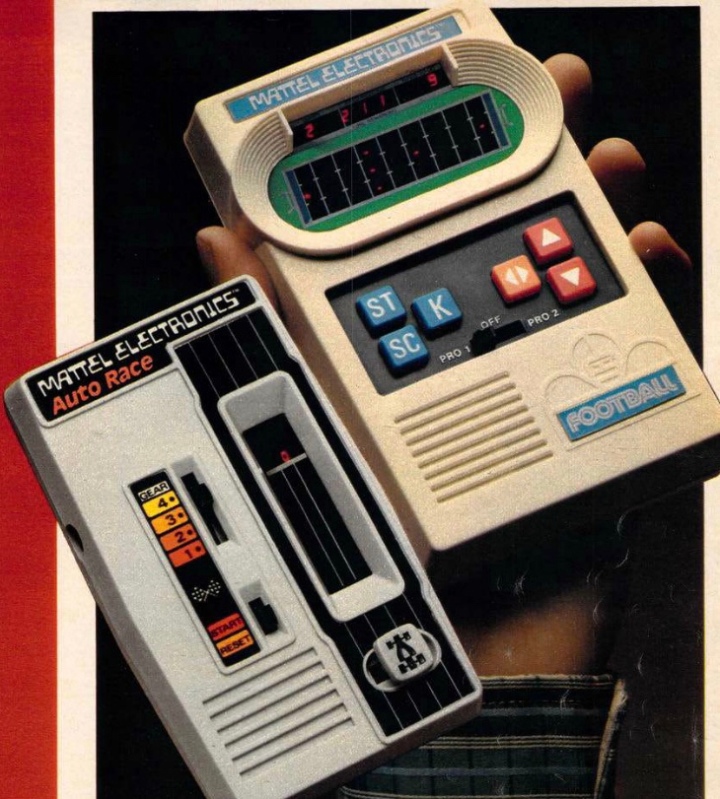 🧩 Classic Toy Countdown #7 – Erno Rubik was a Hungarian architect & professor who became a household name when his mechanical puzzle came to the US in 1980. Supercomputer simulations have shown that any pattern of cube can be solved in as little as 20 moves and a Chinese competitor once solved a cube in just 3.47 seconds. 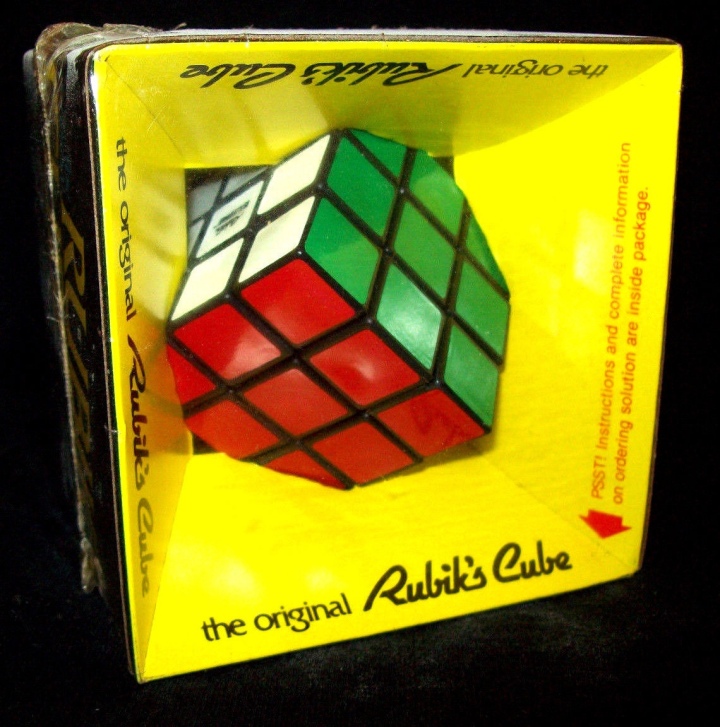 🏀 Classic Toy Countdown #6 – In 1970, Parker Brothers helped kids break the rule of ‘No playing ball in the house’ with the introduction of the Nerf Ball. NERF is actually an acronym for “non-expanding recreational foam”. 4 million were sold in the first year, followed by Nerf Hoops, Nerf Flying Discs, Nerf Footballs, and Nerf Guns. Today, NERF is a $2 billion a year brand. 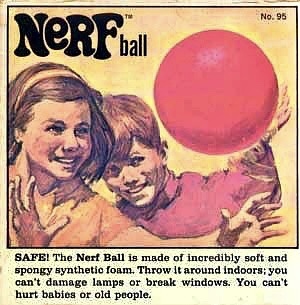 🚚 Classic Toy Countdown #5 – In the late 1940s, Mound Metalcraft was founded as a garden-implement business. Manufacturing in the spare space of a MN school basement, they began also making toy trucks,which were instantly popular. Built ‘Tonka Tough’ the original Mighty Dump, launched in 1964, weighed in at a hefty 11 pounds. The toy trucks were so strong that they had a elephant stand on one in the 1970s.

💰 Classic Toy Countdown #4 – Originally conceived by Elizabeth Magie as a teaching tool against the robber barons of the gilded age in 1903, ‘The Landlord’s Game’ became popularly known as ‘Monopoly’. It was copied / altered by many people including promoter Charles Darrow, who in 1935 sold the rights to his version to Parker Brothers. They also paid Magie for her rights to the original concept, but count 1935 as the game’s debut.

🕹 Classic Toy Countdown #3 – Yes, Pong in 1975 was where the technology debuted, but the Atari 2600 was the 1977 mega hit that brought arcade titles into the home. Space Invaders, Missile Command, Defender, Breakout, Asteroids, and Pac Man lit up screens in full-color. ‘Adventure’ was the first video game to move beyond one screen. Few homes have been without a video game console ever since.

🎅🏻🎁 Classic Toy Countdown #2 – The best toy I ever received from Santa Claus was this LEGO set for Christmas 1975. After building wooden toys since the 1930s, LEGO developed & patented the modern ‘tube & stud’ plastic brick system in 1958 that provided the ultimate ‘clutch’ for building complex models. In 2017, LEGO became the largest toy company in the world.

🐻 For Christmas Eve, the penultimate toy of our Classic Toy Countdown is the simple Teddy Bear. On a hunting trip in 1902, Teddy Roosevelt refused to shoot a cornered bear and the big-game hunter was lampooned in a popular cartoon. With Roosevelt’s permission, a Brooklyn candy maker, Morris Michtom, created a stuffed ‘Teddy’s Bear’ which became the basis for the Ideal Toy Company and an icon of childhood.