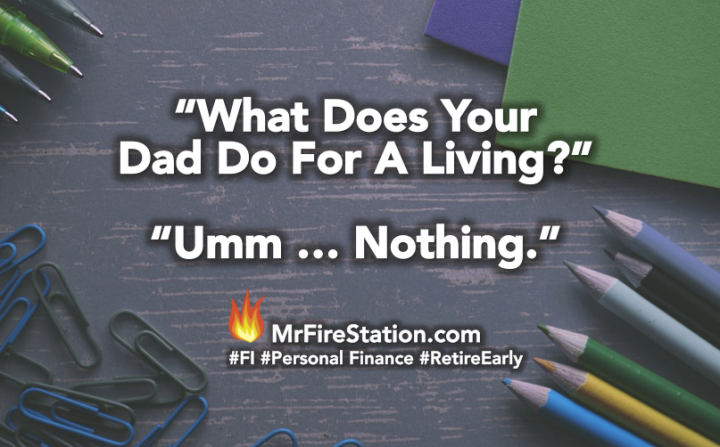 For today’s Mr.FireStation post, I decided to turn the space over to my 18 year old son who starts his freshman year of college on Wednesday.  Just as MRS FireStation posted her perspective on our early retirement a few weeks ago, I thought it would be interesting to hear from the other member of our nuclear family.

“What does your Dad do for a living?”

I have quite an interesting time explaining to other kids my age that my Dad retired early at age 49.  People ask, “What does your Dad do for a living?”  and If I know the person well, I’ll tell them. Frankly, I don’t think I’ve met a single person who hasn’t been positively shocked.

I guess people just think retirement is only for very old people, CEO’s, or people who’ve won the lottery.  The inevitable follow-up question is consistently: “What did he do before that!?”  When I explain he was a pretty high-up executive at MegaCorp, they only sort of understand.  The fact is, regardless of your job, even regular people can also retire early.  How?  Six words: “live below your means” and “index funds”.

When I talk about index funds, most people look at me like I’m pitching a pyramid scheme.  There is great power in one’s ability to invest savings in low-cost funds over long periods of time.  With a $1 million invested and a 4% withdrawal rate, you can live on ~$40K a year while doing nothing for a long time.

I’ve usually lost most people my age by this point.

If I don’t know a person well, and they ask me about my early retired Dad, more often than not I’ll just tell them that he works at MegaCorp, even though he quit. It’s much easier than to get into the whole story with them.  Additionally, there’s no easier way to mark yourself as a rich kid than by telling them your father retired before he was fifty.  There’s nothing wrong with being a rich kid, just people see you as an easy target of sorts.

“Oh, you can’t carry this heavy box? Probably because you’ve never worked a day in your life.”  Guys, my socioeconomic status is completely unrelated to my physical strength. And even if I was super strong, I expect I’d hear “Oh, he’s so strong because he can afford top of the line workout gear and can work out all day.”  (Rant over. The unwanted ‘rich kid’ attention is a small price to pay for awesome vacations) 🙂

So, what’s it like to have your Dad not working?

It’s pretty weird.  Overall, he seems much happier.  We used to do one or two things each weekend – go to the mall, see a movie, attend an event, or go out to eat. Now it seems like we’re doing something every day, and it’s awesome.  That said, one thing I’ve noticed is that my Dad gets more irritated at trivial things than he used to – usually stuff he sees in the news.  I think it’s a bit of a perspective thing – once you don’t have to worry about office politics, the more you become irritated with other things, even if they don’t impact you as directly.

I do feel lucky that I’m the second generation of parents who are financially independent & retired early (FIRE).  It feels like I get a front-row view of what an entire working life can be like.  I get a chance to learn from their successes (and challenges).

So, what have I learned from seeing my dad working for MegaCorp(s) for 25+ years?

That I want to be self-employed!

Even with my limited personal experience of only working part-time retail jobs in the summer,  I’ve decided that doing the “classic” nine-to-five won’t be my preferred approach.  Even while I am working my primary plan to go to college and to get a regular job, every step of the way I’ll be experimenting with a lot of different side-projects to see if I can get one viable enough to be a self-employed job or business.

I think owning your own business has a high correlation with financial independence. I’ve read that self-employed people make up less than 20% of the workers in America, but account for two-thirds of America’s millionaires.

If nothing else, I’ve learned to work smart. Yes, working hard is part of that, but I’ve worked plenty hard in retail and that doesn’t stop me from making minimum wage. If you compare how hard a road worker works every year versus how hard Bill Gates works, it’s clear that working smart is much better than working hard.  Road workers have physically demanding jobs, while Bill Gates goes to meetings and meets with other executives and billionaires.  When you see the road worker makes ~$40K a year, while Bill Gates makes billions, it is easy to see the value of working SMART.  Working smart means finding a career where you can bring unique value to others – and bank it for your future!