More than anything after returning from our vacation last month, everyone wanted to know what it was like to drive on the ‘wrong side’ of the road when we were in Great Britain. All together, we drove almost 20 hours from London to Bath, the Cotswolds to York, from Edinburgh to Inverness. Like many Americans, I had never piloted a right-hand drive car and driven on the left side of the road.

In short, it definitely takes some getting used to. The day we arrived, we drove about three hours from Heathrow Airport into Oxfordshire and onto Bath. It included some city driving, country driving, and road construction. By the time we arrived – I was exhausted from the drive and the jet lag.

By the third or fourth day, I really felt like I had gotten into the swing of driving there.  That said, even after a full two weeks, I never felt like I was completely comfortable.

Here are some observations I had about driving in Great Britain. If you are considering a driving trip there, this will give you some context:

DRIVING IN REVERSE – I’m not really sure which is more of a challenge, driving on the left side of the road, or the right side of the vehicle. We rented a BMW wagon with an automatic to make things as familiar as possible. I drive a BMW at home, so I was familiar with how things worked. Still, being on the other side of the car and road made it feel a lit like I was driving in a mirror. In the car, every time you intuitively reach for something – the AC, the radio, the navigation system – it’s on the other side of what you expect. I used my right-hand mirror 90% of the time and barely used my rearview and left mirror at all.

GETTING IN – As stupid as it sounds, one of the biggest challenges of a right-hand drive car is hopping in. In our cars at home – from a big SUV to a small sports car – I never think twice about it. Your body is accustomed to bending the right way to get in the seat and under the steering wheel. When everything is reversed it becomes quite a contortion for some reason. At the end of two weeks, it was still a struggle.

TALE OF TWO ROADS – The motorways (‘M’) and ‘A’ roads are terrific. They are easy to drive and with traffic only going one direction on a divided highway, relatively quick to learn. The country roads, side streets, and city streets are very difficult to drive. These roads are very narrow by US standards and it was very difficult stay in the middle of the road when cars are coming the other direction. Even though I drive a lot, I found my mind going back to lessons from when I was 15 years old and driving for the very first time.

SINGLE LANE ROADS – In the Cotswolds and Scotland, we did a good amount of driving on roads that were single lane. Not single lane in one direction – single lane for both directions of travel. While these are quieter roads, every 60 seconds or so you need to pull into a ‘passing’ area (shoulder ‘layby’) and let cars going the other way by. The nearest car to a layby will pull partly off the road and flash their lights to signal the other car to proceed. These roads require complete focus and there is little opportunity to see the countryside (sheep!) as you must focus on the road.

UP, DOWN, AROUND – The narrowness of the country roads and prevalence of single lane areas is compounded by the topography. Unlike the US, where the roads are layed out relatively straight and hills are smoothed out, the UK roads follow the landscape. This means a good deal of hills (with ‘severe dips’ & ‘blind summits’ occasionally marked) and a lot of blind corners and zig-zagging. I enjoy spirited driving, but these are especially dangerous with cars coming the other way on a skinny road and no shoulder to speak of.

DR JEKYLL & MR HYDE – The Robert Stevenson book was written about a gentleman who once lived in Edinburgh (Deacon Brodie), but the contrast also applies to British drivers. Ordinary citizens are terrific drivers – much better than Americans, I’d say (they probably need to be given the road challenges in the U.K.). They are polite, they give way when needed, and they don’t hog the fast lane on the highway.

Tradesmen who are driving work vans, however, are the worst on the roads. They drive aggressively, never yield an inch, and love to demonstrate their impatience at every turn. Regardless of the size of their lorrie (truck), they come blasting down the roads and count on everyone else getting out of the way. I’m not sure how they can be so polite when in their family cars and such blooming arses when on the job?
BRITISH ELEGANCE – Driving on the high-speed motorways is a breeze and the Brits do it with amazing sophistication. The only adjustment one really needs to make on the M roads is to remember that slower traffic needs to ‘keep left’ instead of keeping right. ‘Lane 1’ – the closest to the center divide is the fast lane, just like in the US. Vehicles smoothly shift between the lanes and always return to the slower lanes at the soonest opportunity.

LIFE IN THE FAST LANE – No one hangs out in the motorway fast lane longer than they need to and it is a wonder to see the graceful ebb-and-flow of vehicles back and forth between the lanes as conditions warrant. On the motorways, the larger lorries stick to the far left lane – I think they have a slower speed limit than cars, so they stay mostly out of the way. The speed limit on the motorways is generally 70mph, although a good number cruise by between 80-90mph.

ROUNDABOUT NAVIGATION – We have a good number of roundabouts in our part of the US, but those are child’s play compared with the UK.  Not only are there two, three, and four lane roundabouts to navigate, but sometimes the roundabouts are attached to another (or even two others).  Our BMW had a great navigation system which was invaluable for making sure we were turning out in the right places.

Overall, I think the driving went pretty well for us. No accidents. No worrisome incidents. Just a lot of white-knuckle moments that felt like near-misses.

As attentive as I was to the road, my wife found it equally important to keep her eyes on the road. Except for the few hundred miles we spent on the motorway, she too was focused.

Like every other American couple we encountered we had just one goal – get home without a crash. Quite a few people – including my wife – said they would never attempt it themselves once they had seen how tricky it could be.

My advice would be that if you are quite confident in your driving – you honestly believe you are pretty good at it – then you can tackle the challenge of driving on the ‘wrong side’ of the road.  But, be sure of your skills and double-check your rental car insurance just in case! 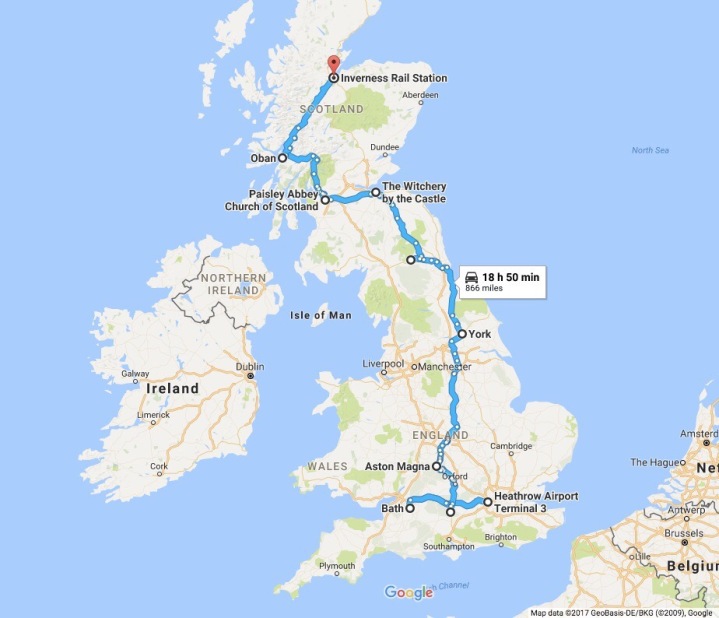 8 thoughts on “FIRE Travel – Driving On The Wrong Side”