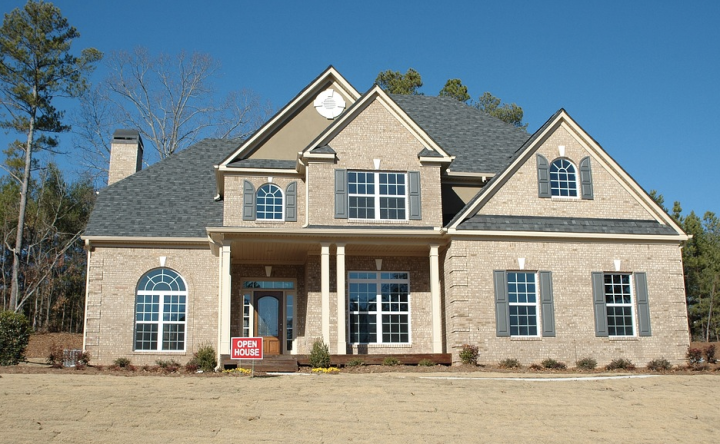 If you ask many people what defines the American Dream, they would say ‘owning your own home’.  For decades, home ownership defined what being independent and successful looked like.  More than just shelter, a home is viewed as an ever-giving fountain of financial security and status.

That being the case, it is not surprising that Americans have poured more and more of their wealth into housing than any other spending.  In a post from a few months ago – “Over 75 Years, Consumer Spending Starts at Home” –  I noted how incredible it is that there seems to be no limit to what people spend on housing.

It’s this ladder of escalating housing costs that I am convinced leaves otherwise successful people little chance of reaching FIRE and retiring early.  To test my theory, I created a financial analysis of two successful Americans – who I’ll call Tom & Bob, for this example.

At 40 years old, they are both Tom & Bob are making six-figure salaries – and have $750K banked for retirement.  They are working toward having a retirement nest egg of $3 million.  They both are at a comfortable point in their careers, expect to continue to do well, and are thinking about their next steps financially.  Should they continue to save, or now take some money to spend?

At this point of their lives, they make different decisions.  Tom and his family stay in their $250K house, while Bob and his family trade-up to a $550K “premium home”.  A bigger home is certainly a big luxury for Bob and his family – but since things are going well for them, they decide to make the move.  They hope to benefit from the extra elbow room and may also find themselves in a neighborhood with better schools for the kids.

In doing so, they are taking on a bigger mortgage spend (about $2,300 more a month, including taxes & insurance), since they are using a fifteen year loan.  The fact that they can make the payments on a 15 year loan says to them that they are making a choice that is affordable for the success they have achieved.  The loan is somewhat offset by the mortgage interest deduction for their income tax (~$900/month), but the larger home comes with added utility/upkeep costs as well (~$300/month, assuming they bought about 1500 extra finished square feet).

Tom and his family, in the meanwhile, are able to put an extra $1,800 a month into their retirement savings.  Holding all other savings contributions constant, it is amazing how much sooner Tom hits his retirement goal than Bob does.  The chart shows the distance between their early retirement savings trajectory. 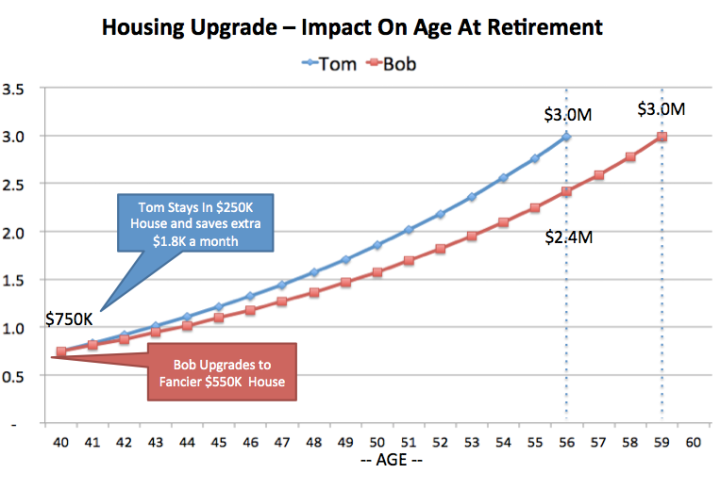 The extra retirement contributions mean that Tom will reach his $3 million savings goal at age 56 and will be able to retire before 85% of Americans.  Bob, on the other hand, will have to wait until he is 59 years old – three years after Tom.  Since 62 is the average age of retirement in the US, you could say that Bob is still able to retire early, despite upscaling his family’s home – and the added luxury cost him only 3 more years working.

This example keeps home appreciation out of the equation.  Since Bob now has a more expensive home, he would likely benefit from about 3.5%-4.0% appreciation each year, using the Case-Schiller historical average (adjusted for constant square footage).  This gain would be another benefit for Bob – over $500K before he retired – although the AARP notes that only a small percentage of people sell their homes when retiring, as people typically prefer to “age in place”.

(Since the appreciation benefit is ‘locked up’ – in the planning horizon of this analysis, I kept it out of the numbers.  That says, it is likely significant to your total net worth.  That said, not every house goes up in value, as I wrote in this post about one of our ‘Financial Failures’ on our way to FIRE.)

When it comes down to it, the example illuminates the basic question many of us ask on the route to early retirement – what is the ultimate luxury? – a premium home, or an extra few years of early retirement leisure?

Each of us has to make this choice for themselves – and some are lucky enough to be able to swing both.  We were fortunate enough to purchase an upgraded home almost 8 years ago and retire early – at age 50.  While that worked for us, I’ll be the first to say the home we built wasn’t a financial success as more expensive homes are more risky investments.

In the comments, I would be interested in your thoughts about this tradeoff.   How you have you – or will you – approach it on your journey to FIRE?  Any other considerations?

24 thoughts on “Financial Analysis: The Impact of Trading Up Houses on Early Retirement”