I’m continuing the discussion from my last post on the cost of vehicles by looking at the differences in the total cost of ownership for different models – basic transportation and luxury vehicles – over time.  In April, I analyzed the impact of luxury homes on the number of years someone needs to work and reached the conclusion that trading up to a luxury home probably adds two or three years for the average person.

Even though cars are initially much less expensive than a home, they have several strikes against them: unlike a home, they depreciate significantly; they require regular replacement (3-6x over 30 years); and. there are no tax deductions for their financing.

Using the Edmunds.com Total Cost of Ownership calculator, I looked at six different models of SUVs over five years of ownership with an assumption of 15,000 miles a year of usage: 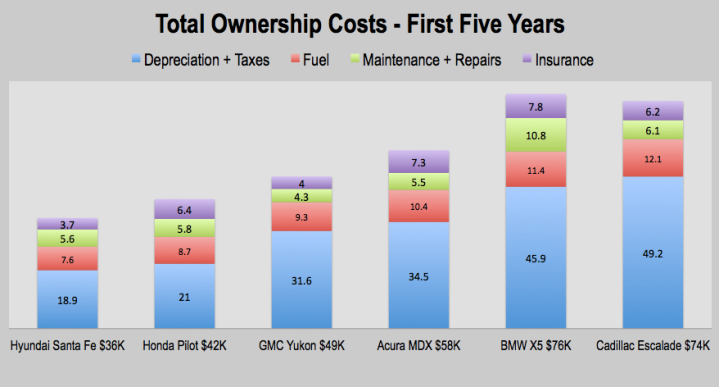 You can immediately see why Dave Ramsey says that the new status symbol should be a paid off house instead of a BMW.  Among these SUVs, a BMW will run you almost $35K more than a Honda Pilot every 5 years between now and your retirement.

You might say the analysis is silly because 22 year olds don’t drive BMW SUVs, but you could start the analysis 10 years later and the retirement age would then match the average American at 62 years old.  You could also discount the entire analysis by HALF and it would still be an incredible $350,000 in savings.  That would be the rough savings for people who might keep their cars for a full 10 years.

Having driven a BMW X5 for the last 7 years, I was quite shocked at how much the cost difference added up to over the course of a career.   I am happy to have driven basic Toyota’s and Honda’s for most of my working days.  The luxury SUVs we have owned (an Acura MDX before the current BMW) were company cars – MegaCorp paid their lease, insurance, maintenance & repairs. I bought out our current BMW four years ago with an early-retirement MegaCorp discount that was more than 60% off of its residual value.

As I’ve written, we’re getting to the point of wanting to replace our aging SUV next year.  While I would love to get another luxury vehicle (a couple years old, with low miles), I’m not sure my enjoyment matches the tremendous cost.  I expect I will look to downsize either the size, performance, or brand name on the next vehicle we buy, although we budgeted for nice cars in our overall FIRE plan.  Since we hope to be retired for at least as long as we were working, the savings to be gained by driving a less luxe vehicle is the same as the analysis above.

Does the cumulative difference in cost / years of working surprise you?

5 thoughts on “Financial Analysis: How Many Years Of Work Would A Luxury Vehicle Cost You?”