I got an email from a friend from high school recently asking how our early retirement financials are holding up since it has been two years since our FIRE escape.  He wanted to know if we were trending over or under our projections.  Stated another way, he said “I want to know if I can retire!”  🙂

After reading his note, I realized that I hadn’t yet provided an update on our investment & spending plans since hitting our two year FIRE Anniversary last month, so I thought I would share that now.  The headline is that while we had been tracking AHEAD of our plan, we’ve now started to track a little BEHIND.

This is a very new turn for the worse.  Unlike the general market trends, both MegaCorps I have worked for are having a tough run on Wall Street lately, declining 28% and 16% since the start of the year.  They were both riding high when I first retired, but both of these two solid blue-chip companies have hit a tough patch.  The MegaCorp I’m an official retiree from (and invested the most in) was actually the worst performing stock in the S&P 500 in the first quarter of the year.  Yikes!

When we met with our financial planner earlier this month his comment was that “the damage is done” when it comes to MegaCorp’s impact on our portfolio.  When we started meeting more than 10 years ago, MegaCorp stock options & grants represented about 70% of our total retirement nest egg. Now that number is down to a small 6%.  That’s mostly through us selling grants & options – but also because its value has now sunk so low.

Here’s the impact it has had on our retirement savings versus our original FIRE Plan: 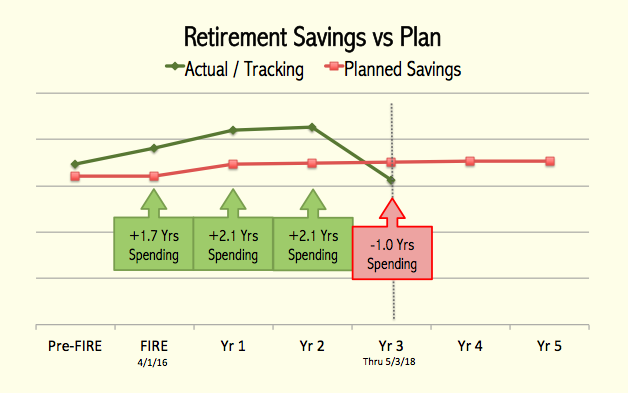 We were way ahead of our plan (more than 2 years spending) when MegaCorp stock was flying high, but we are now a full year’s spending behind.   ‘Easy come, easy go’ they say.

Even though it’s down to 6%, the value of our MegaCorp stock options is still the part of our portfolio I look the most at.  But, given the now small proportion of it to our other investments, it really has little downside at this point.  Especially considering that their P/E ratio has fallen from a irrational 26 to an incredibly low 11.

(I should note that this is despite MegaCorp returning to top line growth and posting still-record profitability.  The fact is that Wall Street has lost confidence in the company’s growth prospects for now, they have new management in place, and they just made a very expensive acquisition.  They will need to put up some good numbers to get back in the analysts good graces – or be acquired.)

The rest of our portfolio has (thankfully) performed pretty well over the last year.  That has cushioned some of the blow from MegaCorp’s share declines. As I’ve noted before, we have been riding with 3 years of cash as a cushion against market timing,  While the “damage is done” from MegaCorp in our current tracking, we could still benefit from a turn of fortunes over the next 12-48 months as our options hit the close of their exercise windows.

I should note that our spending has played out right on track over this period.  Health insurance was more than we initially budgeted for, but we’ve spent less in other areas than we expected.  We don’t have any big additions/remodeling to focus on at our house this year, so that should keep our spending in check this year as well.  I’ll provide a full update on our spending later this year, but there isn’t anything I’m worried about on that front right now.

How are your FIRE nest egg /  investments tracking so far in 2018?