Now that we are into Fall, I thought I would share a few travel posts on some potential places for cold-weather vacations.  We live in Minnesota, so we are always looking for some interesting places to warm up in the winter time.

This past year we used New Orleans as a jumping-off point for a Caribbean cruise.  I had already been to the city several times before, but I love the carefree vibe of ‘The Big Easy’ and think it is one of the most unique cities in the United States.  It was a non-conventional but entertaining launch point for our cruise.

You can’t think of New Orleans without think of the after-hours craziness of Bourbon Street.  It’s a ‘unique to New Orleans’ party zone that is hopping pretty much every night of the week.  It’s not everyone’s taste, and almost 100% filled with tourists from other places, but amid the neon lights and cheap alcohol, you might find a great spot with amazing music that you’ll never forget.

We’re not huge drinkers, but on our last visit to New Orleans we were!  My 22 year-old son is very interested in cocktails and mixology and we took a tour of some famous places in New Orleans, known for their alcoholic concoctions.  One historic establishment is known for inventing the Grasshopper, Pat O’Briens is as famous for their super-sweet Hurricane as their dueling piano bar, and Jean Lafitte’s Old Absinthe Bar serves the licorice-laced treat with the ghosts of former patrons, Mark Twain, PT Barnum, Walt Whitman, and Oscar Wilde.

Historic Jackson Square is a quiet, dignified respite in what can otherwise be a chaotic French Quarter.  Named for Andrew Jackson, who freed the city from British Control in the War of 1812, the floral plaza features a statue of the victorious General and in January they celebrate his victory.  The square has been towered over by the St. Louis Cathedral since 1720, when New Orleans was a French city. 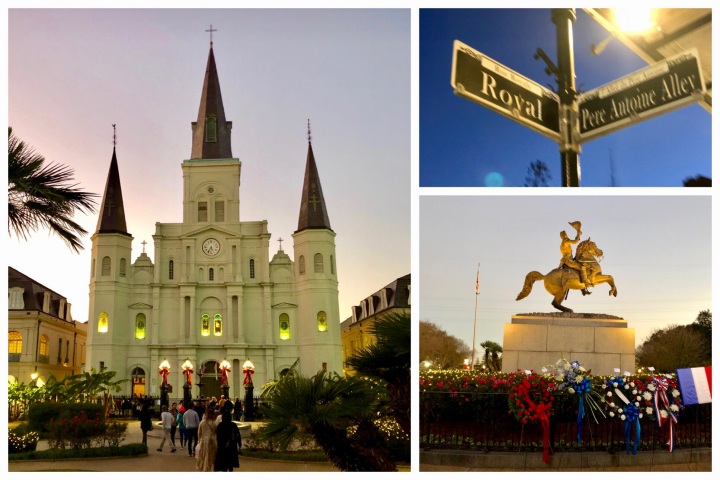 Just across from Jackson Square is the ever-popular Cafe Du Monde.  Typically overrun by tourists – but worth a stop anyway – Cafe Du Monde features light-as-a-feather, powdered-sugared coated beignets and chicory coffee.  Adding chicory to a coffee blend gives it light chocolate notes.  I like going here in the morning, before the throngs arrive, and watching artists and street peddlers set up their wares on the sidewalks.

Riverwalk is a newer development in New Orleans.  I think it’s struggled a bit to find it’s market, but it is worth a stop for a few reasons.  First, it really connects the city in a nice way to the Mississippi River with a nice riverwalk.  There is a lot of water traffic that goes through this area – freighters, tankers, cruise ships, and paddlewheelers.  Second, there it is an area where there is always something going on: the massive New Orleans Convention Center, a Science Museum with IMAX screen, a giant Harrah’s Casino, and a a nice – if slightly oddly configured – shopping center. 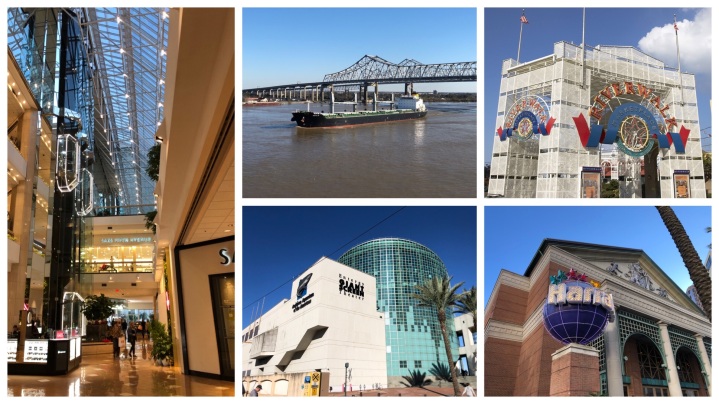 New Orleans might seem an odd place for a World War II Museum, but they really have a great one.  The city was home to the company that made the unique amphibious landing craft that were used in the war effort and the family that owned the company underwrote this museum.  It’s quite big – almost a small campus of buildings – and very popular.  Different parts of the museum focus on different parts of the war: the war in Europe, the war in the Pacific, and life back on the USA ‘homefront’.  The exhibits are top-notch and they really bring the stories of WWII courage and sacrifice to life.

These are just a few stops and experiences that we’ve enjoyed in New Orleans.  Other top rated attractions are the city parks, Audubon Zoo, New Orleans Museum of Art, and the very unique cemetery tours.  We haven’t been to the city during Mardi Gras, but that might be the best time to experience the uniqueness of the city.