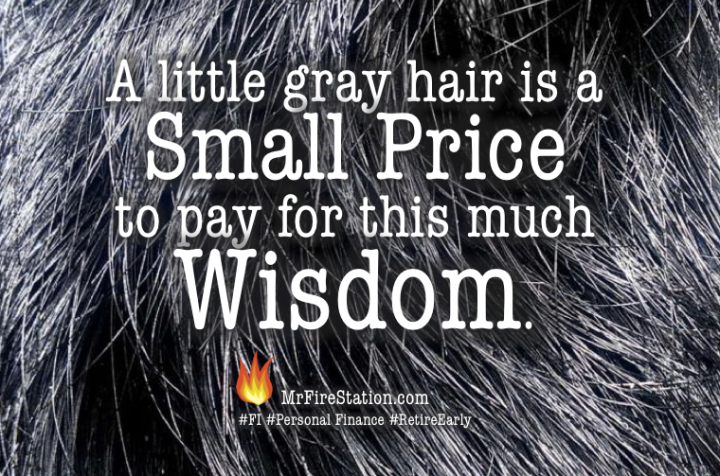 We had a neighborhood Christmas party last week and somehow the conversation turned to the color of my hair. At age 50, it is hanging in there pretty well – hardly any gray right now – and has become an interesting microcosm of my early retirement so far.

I’ve read that most people’s hair turns gray 10-20% for each five years after they turn 25 years old.  I got my first single gray hair on 7/16/1996 when I was 30 years, 3 months and 2 days old. I know the date exactly because I was at a baseball game with my wife and she noticed it. I wrote it down on the ticket stub. Even then, I had friends who had asked how it was that I didn’t have any gray hair.

Jump forward 20 years and a couple people at the party this past weekend asked my wife if I dyed my hair. The answer is no. I did it once about 4 years ago at my wife’s prompting – when I started getting the gray in the temples ‘Mitt Romney look’ – but I thought it looked absolutely terrible. I have never done it since. What I have is 100% natural ‘me’ and I think I will leave it that way. Say what you will about gender expectations, but I think gray looks better on most men than dying their hair.

What’s interesting is that my hair has become noticeably LESS GRAY than it was a year ago. Sort of amazingly so. I really attribute it to having less stress and more freedom in my life since I retired. While they say that adjusting to retirement has it’s share of stress (which I wrote about in this post), I would say that I feel like I have adjusted pretty smoothly. I’m also eating and exercising a bit better, so that could be a contributor too.  (Smoking, by the way, is reported to be a major accelerator of gray hair).

While I don’t think my luck with my hair will continue for much longer (since I’m 50), it is nice to be ‘ahead of the game’ for a little while. It’s an unexpected benefit of retiring early and a real commentary on the stress we literally carry around on our heads when we are working.  What physiological signals of your work burdens do you think you carry with you? What happened/will happen when you retire?

8 thoughts on “FIRE Station Fun – Turning Back The Gray”