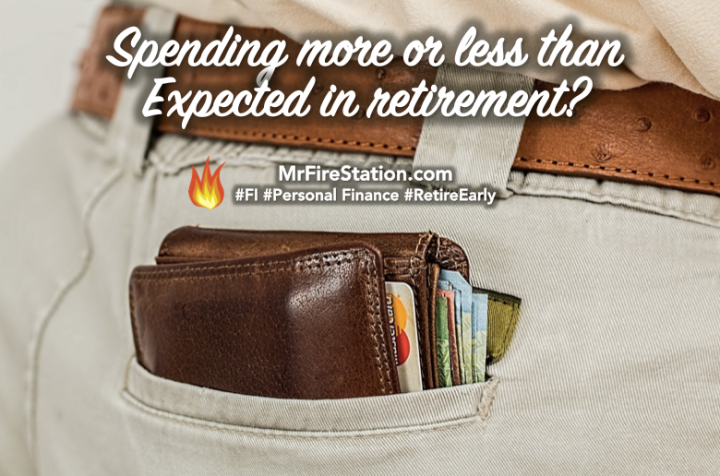 Having enough money to support the lifestyle you planned for early retirement is the key concern for many people on their path to financial independence and retiring early (FIRE).  The awesome website early-retirement.org had an interesting discussion recently over how much people are spending in early retirement: more, less,or about what they expected to spend before they left their jobs.

For us, our spending has been pretty close to what I expected this year.  If anything, we’re spending a little less than what I would have guessed, although we have some trips and household repairs coming up that might be a bit pricey.

Here is a chart that shows the responses that people had to the forum question:

The numbers aren’t scientific by any means, but they do represent the input of almost 50 people who responded to the question.

You can see that many people in the forum (28%) commented that they are spending MORE in retirement than they initially planned by choice.  They wanted to travel more or treat themselves to some luxuries that were enabled by their investments doing better than expected.  At the same time, others were facing unexpected health care costs – either higher because insurance is costing more than planned or because they had health issues that have emerged unexpectedly.

Among people spending about the SAME as what they expected (33%), plenty are still spending more than they did before they retired.  As was our case, many people worked long enough to bank a higher level of spending in retirement and upgrade their lifestyle, particularly with more travel.  These folks are spending more by choice than by need.  Others are spending what they expected because they are very good budgeters and track their expenses very closely.  Some of these folks are spending less than they did pre-retirement, although I would say that is a minority of people.

Slightly more people reported spending LESS in early retirement than they expected than the other two categories (39%).  The reasons were quite varied.  First, some commented on inflation not being as high as they had expected over the last 5-10 years and that has kept their expenses lower.  Inflation changes even by as little as 0.5% a year make a huge difference over a decade (5% of your net worth).  Second, others reported that they had more time to look for deals and discounts in early retirement and that was keeping their spending low.  I know that traveling ‘off season’ is certainly saving us a lot of $$$.  Lastly, I think we are spending less now because our son isn’t living at home and we’ve frankly reached the point where we don’t have that many more things we need to buy.

Regardless of what you are spending in retirement, the most important thing is to keep flexible because unexpected things certainly arise and market conditions can change quickly.  For those of you who have already retired, are you spending less or more?  For those of you still on your journey, how will you manage flexibility?