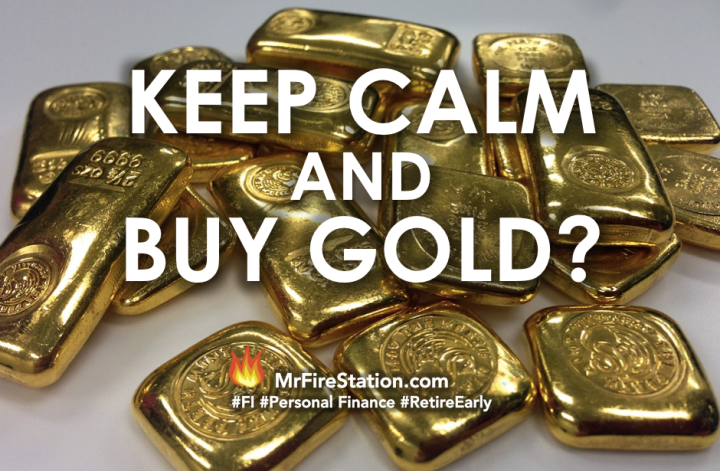 “If the value of the dollar goes crazy, owning gold gives me peace of mind,” says a friend of mine that is a certified ‘gold bug’.  He believes that gold – as the ultimate basic currency – is a hedge against a sudden global geopolitical event that undermines the international system of currency.

Gold is frequently in the news, featured on late night TV, and discussed with an incredible passion, unlike any other potential investment.  We don’t carry any gold in our portfolio today, so I thought I would spend some time learning about the headlines of gold as an investment …

Gold & International Currency – The reason many gold bugs invest in gold is they are worried about the international integrity of the US dollar.  The dollar is used by many countries as a currency standard and there have been headlines recently that Russia and China are teaming up to replace the US dollar with a gold-backed currency.

You may have heard that the US Dollar was backed by a ‘gold standard’ until 1971 and inflation rates have accelerated since then.  While some financial experts have called for a return to the gold standard, it has gained little traction in Washington DC, who prefers to print money based only on the ‘Faith and credit of the United States of America.”

Having Russia and China – two of the world’s largest gold suppliers team up against the US Dollar will likely have an impact on the future price of gold.  It is expected to reduce the volatility of the Chinese Yuan and Russian Ruble and could impact the dollar’s value.

US Maintains Large Gold Reserves – The United States holds over 8.1 metric tons of gold in reserve of our currency.  We hold more gold in reserve than any other country by a wide margin.  This is one of the reasons the US dollar serves as the global currency standard.

Most of the gold owned by the US is held at Fort Knox in Kentucky.  It is a fortress-like structure that is estimated to hold as much as $180B in the precious metal.  The gold vault is lined with granite walls with a nearly two-foot thick, blast proof door that weighs 20 tons.  The facility is ringed with fences and is guarded by the United States Mint Police.  The Depository premises are within the site of Fort Knox, a US Army post, allowing the Army to provide additional protection.

Gold A Volatile Investment – Because it is the currency of last resort, Jane Bryant Quinn calls gold the ‘the ultimate worry bead.”  Its investment profile is difficult to follow.  “What moves the price of gold?” Quinn asks, then answers “Who knows.”

The chart below shows that the price of gold over the last 100 years: 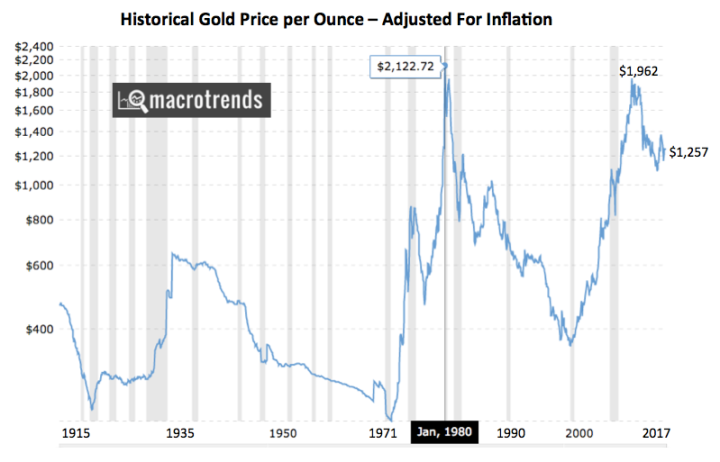 The chart shows lots of UPS and DOWNS:

That is a pretty volatile trend, isn’t it?  There is certainly some correlation with periods of inflation and global instability (1930s, 1970s & 9/11), but I think those events are pretty difficult to time – and the equity markets found their way home, eventually.

An Investment That Doesn’t Produce Anything? – Perhaps Warren Buffet did the best job of putting the investment productivity of gold into perspective.  He noted that all of the gold that exists in the world would equal a 68-foot square sided block.  A giant chunk of metal with a value of about $1T dollars.  He commented that it had the same value as all of the agricultural cropland in the United States, or the equivalent of 16 companies like ExxonMobil.

He then warned, ”A century from now, the 400 million acres of farmland will have produced staggering amounts of corn, wheat, cotton, and other crops—and will continue to produce that valuable bounty, whatever the currency may be. ExxonMobil will probably have delivered trillions of dollars in dividends to its owners and will also hold assets worth many more trillions (and, remember, you get 16 Exxons),.  The 170,000 tons of gold will be unchanged in size and still incapable of producing anything. You can fondle the cube, but it will not respond.”

Just like any other investment, the appreciation of gold carries tax implications.  You need to keep good records of what you paid for gold and how much it appreciated when you sell it.  Many people buy gold through exchange-traded funds (ETFs) that make the buying and selling of gold as easy as buying a mutual fund.  The gold ETF shares are backed by banks that hold actual gold bars on deposit in a gold vault, but you still need to consider the credit worthiness of the firm that is offering the ETF

Five states – most notably, Arizona – are considering legislation that would make gold (and silver) legal tender again.  It is not now.  This challenge to the authority of the Federal government carries the potential implication that gold could be held by citizens without having to pay taxes on it’s appreciation.  It is probably a long shot to be passed and become a real option, but it gives you an idea of how far people are willing to push for gold to have a significant role in our fiscal system.

The Best Use For Gold – Calamity Insurance?

Gold HAS been effectively used as a hedge against hyper inflation and geopolitical calamities.   Wealthy people sometimes advocate it as useful way to protect their wealth by maintaining a stock of gold.

In this sense, it is used more as a ‘store of value’ than an investment.  It’s an insurance policy of sorts for people that have time to worry about the worst.  These people generally buy gold coins such as the American Eagle, Canadian Maple Leaf, or South African Krugerrand.  Even Australia (Kangaroo) and China (Panda) have gotten into the game.  The coins are typically stored in a home vault or safety deposit box.  Be warned though, that In some countries, bandits have actually targeted wealthy people withdrawing their gold in times of war!

While I haven’t spoken to many financial advisors who truly suggest that gold has a meaningful place in our portfolio, a few have said that it ‘might have a place’.  To me, it seems that these folks are just hedging their recommendations a bit.  Several said you could consider it – but no more than 5% of our total nest egg.  After doing a lot of reading on the topic – and seeing it’s relatively high historical price per ounce – I am not keen to really store any of our ‘value’ in gold at this point.  View it as a vote for a peaceful world!

What are your thoughts on using gold as a tool in retirement?  There are an incredibly broad set of considerations that people use in evaluating it – what are yours?

4 thoughts on “Gold – An Investment in Fear?”