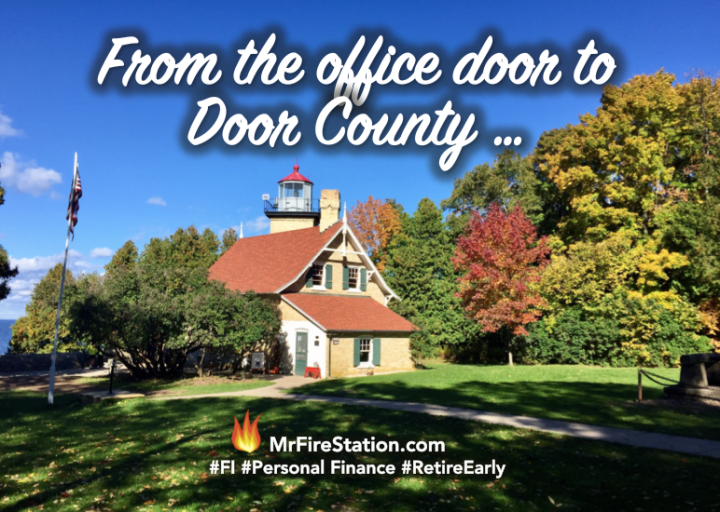 My former boss at MegaCorp announced his pending retirement last week.  It was big news with a number of people calling me and telling me about it from the office.  He was immediately moved out of his role and put into ‘special projects’ until his final day on April Fool’s 2017.  It’s exactly one year from when I departed, although I didn’t come close to matching his 37 years with the company.

I chatted with him on the phone, wished him well, and invited him out to enjoy some McCallan – his favorite scotch.  He sounded very happy and was adjusting to having handed his immediate responsibilities to his successor.  I told him he didn’t need to get to the office at 7am anymore – or stay after 6pm, which was his custom.  He has done that for so many years, I’m sure it has to be quite a change for him!

I mentioned the conversation to my wife today when we were near the waterfront in Door County, Wisconsin.  Door County is the beautiful peninsula of Wisconsin that reaches out into Lake Michigan.  Like Martha’s Vineyard or Napa Valley – Door County is filled with quaint little towns, wineries, and spectacular views – especially with the fall foliage reaching it’s peak.

We had lunch in an old brick fire station (very appropriate for this website!) that has been converted into a brew pub.  While I only quit working a little more than six months ago, I surprised myself by saying that I can hardly remember what is was like to walk in the office door anymore.

I then thought about my old boss, who was presumably still at the office today (a Monday), and commented that I was now shocked by the thought of going to the office on such a beautiful autumn day.  My wife said “Yes, it’s always great to be on vacation.”  “Permanent vacation …” I added, happily.

When you are counting down the days to reaching your own financial independence and early retirement (FIRE), it can seem like the days drag on.  All I can say is there is a wonderful place waiting for you on the other side of all of that hard work.  For me, it looks a lot like Door County on a sunny October day.  Enjoy the journey to FIRE – it’s worth it!

18 thoughts on “From The Office Door To Door County”